“[This year’s hurricane season] fits a pattern: changes to our climate are making extreme weather events more severe and frequent, pushing communities into a vicious cycle of shock and recovery,” said Mr. Guterres at a high-level event on Hurricane Irma, recalling that the past month alone saw four major hurricanes in the Atlantic Ocean, causing much damage and destruction.

“Extreme weather linked to climate change has an impact all over the world, including floods in southern Asia and landslides and droughts in Africa,” he added, noting also the impact of rise in ocean surface temperature on weather patterns.

In addition to controlling the carbon emissions to help control the rising temperatures, as well as adaptation methods, he urged better preparation ahead of storms, for mitigating their effects and to recover from them.

Such efforts, he noted, are also important to protect the progress made towards agricultural and economic development as well as to contribute to the implementation of the 2030 Agenda for Sustainable Development.

Also speaking today, Miroslav Lajčák, the President of the General Assembly also highlighted the growing impact of climate change and that the current trend of greenhouse gases emissions would increase likelihood of severe weather events.

“The impact of Irma, Maria and other recent systems reminds us of the importance of adaptation and resilience to climate change and further strengthening mitigation efforts, through the implementation of the Paris Agreement [on Climate Change], which is a milestone for collective engagements towards the planet’s sustainability,” he said, adding:

Let us be inspired to take personal and collective action to support the victims and survivors rebuild their communities, homes and lives, stronger than even beforeMiroslav Lajčák, President of the General Assembly

“Let us not let the lives lost be in vain. Rather, let us be inspired to take personal and collective action to support the victims and survivors rebuild their communities, homes and lives, stronger than even before.”The high-level meeting was co-hosted by the Secretary-General and the President of the General Assembly, and saw the participation of a number of top Government officials from UN Member States, including Gaston Browne, the Prime Minister of Antigua and Barbuda; Darren Henfield, Minister of Foreign Affairs of the Bahamas; Bert Koenders, the Minister of Foreign Affairs of the Netherlands; Alistair Burt, the Minister of State for International Development and the Foreign and Commonwealth Office of the United Kingdom.

It was also attended by Achim Steiner, the Administrator of the UN Development Programme; Mark Lowcock, UN Emergency Relief Coordinator; and Kristalina Georgieva, the Chief Executive Officer of the International Bank for Reconstruction and Development and International Development Association at the World Bank.

Hurricane Irma left a wake of destruction on several islands in the Caribbean, affecting Antigua and Barbuda, Anguilla, British Virgin Islands, St. Barthélemy, St. Martin, the Virgin Islands, Puerto Rico, Dominican Republic, Haiti, Cuba, the Bahamas, Turks and Caicos and other islands in the Caribbean Sea, affecting hundreds of thousands of people and resulting in massive economic damage across the region.

UN agencies have been assisting with response and recovery efforts since the storm struck and last week, the Organization launched a $15.1 million regional humanitarian response plan, covering the urgent needs of the most vulnerable populations impacted.

The plan aims to reach an estimated 265,000 affected people until the end of this year.

According to a news release issued by the Fund, the allocation will enable UN and other organisations support the national and regional response, including providing immediate food, critical health care, clean water and other urgently needed aid to the people most affected by Irma, in particular women and girls.

“We will continue to stand in solidarity with the people of the Caribbean to ensure maximum support is available to the commendable national and regional efforts,” Mr. Lowcock, who manages CERF on behalf of the Secretary-General, said in the release. 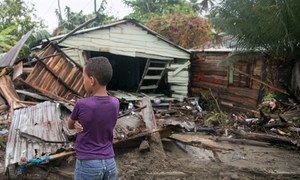 Hurricane Irma continues to wreak havoc in the Caribbean, leaving a trail of destruction in its wake, the United Nations humanitarian wing said today, warning that areas along its path continue to remain at risk of significant damage.