UNICEF/Brown
Newly arrived Rohingya refugees sit at Shamlapur beach in Cox's Bazar district, Bangladesh, after traveling for five hours in a boat across the open waters of the Bay of Bengal.
17 September 2017

As thousands of Rohingya refugees – including many children – having fled violence in Myanmar continue to arrive in Bangladesh, a United Nations-supported vaccination campaign has been initiated to prevent the spread of potentially deadly diseases.

According to a news release by the UN Children's Fund (UNICEF), the agency and the UN World Health Organization (WHO) are supporting the Bangladeshi Ministry of Health-led campaign targeting measles, rubella and polio to inoculate some 150,000 Rohingya children below the age of fifteen in 68 refugee settlements near the country's border with Myanmar.

“We are happy that we were able to initiate the immunization campaign so quickly to protect the population from a possible measles outbreak” said Navaratnasamy Paranietharan, the head of WHO in Bangladesh.

The seven-day campaign was planned by the UN health agency, which is also managing and monitoring its field implementation. UNICEF has provided vaccines, syringes and Vitamin A capsules.

“Measles is a very infectious and dangerous disease during emergencies, especially for children who are already weak and malnourished,” added Edouard Beigbeder, the head of UNICEF in Bangladesh.

“With thousands of children crossing the border every day, vaccination is crucial to prevent the spread of potentially deadly diseases.”

According to estimates, more than 410,000 Rohingya refugees have arrived in Bangladesh since August 25, with children making up about 60 per cent of that number. 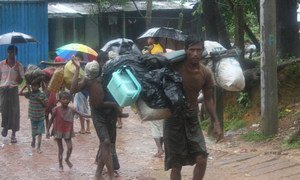 The humanitarian situation in parts of Bangladesh sheltering hundreds of thousands of Rohingya refugees continues to deteriorate, making the crisis one of the fastest growing refugee crises of recent years, according to the United Nations.