The situation in Darfur has been largely calm in recent months, but there is continued violence fuelled by a proliferation of weapons and competition over natural resources, a senior United Nations official today told the Security Council.

“Most of the insecurity currently experienced in Darfur can be attributed to the tensions originating from the underlying causes of the conflict, exacerbated by the proliferation of arms in the hands of civilians and militia groups,” said Jeremiah Mamabolo, Special Representative and Head of the African Union-UN Hybrid Operation in Darfur (UNAMID).

“Inter-communal disputes usually triggered by competition over land, water, livestock and mineral resources, have become increasingly violent due to the availability of weapons,” added Mr. Mamabolo.

The Government is carrying out an arms control campaign but reactions to the arms collection campaign “vary,” according to Mr. Mamabolo, who noted that the opposition and groups who did not sign the peace agreement are opposed to it.

Briefing the 15-member Council in New York on quarterly developments in the region of Sudan, Mr. Mamabolo noted progress on the implementation of the peace agreement is “limited.”

That agreement was signed in 2012 by the Government of Sudan and the Liberation and Justice Movement (LJM), based on the Doha Document for Peace in Darfur (DDPD), which calls for a permanent ceasefire and comprehensive peace agreement to end the fighting.

Progress is particularly limited on issues such as “durable solutions to displacement, the administration of land, water, and other scarce resources, and the issue of armed militias,” Mr. Mamabolo said.

He also noted that efforts on an inclusive peace agreement by the AU High-level Implementation Panel (AUHIP), with support of UNAMID, remain “inconclusive” due to a stalemate between the Government and one of the parties.

“We call upon the Council and those with influence on the parties to stress the importance of a political settlement and desist from bringing more suffering to the very people that they profess to represent,” said Mr. Mamabolo.

Among other issues raised, Mr. Mamabolo said that cooperation between the UN and the Government of Sudan has “noticeably improved” with a more open humanitarian environment and faster approval of movements within Darfur and clearance of visas, except for human rights staff. 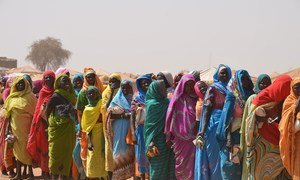