A top United Nations official today commended the Government of Niger for tackling the country’s complex humanitarian crisis, including leading the provision of life-saving aid to hundreds of thousands of the most vulnerable, and highlighted the need to address its root causes.

“I was impressed to see how brave aid workers are working with the Government to deliver assistance to the most vulnerable people in Niger under difficult and dangerous circumstances,” said the Under-Secretary-General for Humanitarian Affairs and Emergency Relief Coordinator, Mark Lowcock, concluding a three-day visit.

During the visit, the first for Mr. Lowcock since assuming his post earlier this month, he travelled to the Diffa region – where aid has been provided to 400,000 people; one out of two individuals requires humanitarian assistance; and Boko Haram attacks remain a grave threat.

Mr. Lowcock pointed to the success of scaled-up humanitarian support in Niger in recent years, saying: “We have reached millions of people, unquestionably saving lives and averting the worst. But humanitarian needs remain high and sustained international help behind Niger’s efforts is critical.”

N’Gagam, a village in the Diffa region near the Nigerian border, had a pre-crisis population of 1,000 but now hosts 13,500 people from both Niger and Nigeria whose homes were destroyed or villages are considered too dangerous to return to, according to a news release issued by OCHA.

A 30-year-old woman named Achaitou, who fled Nigeria to N’Gagam with her four young children, told Mr. Lowcock how she survives with help from the UN and partners. “Despite daily struggles, she maintains her dignity and retains hope for a better future for her children. But she remains terrified of violence by armed groups and often takes her children into the bush at night, risking disease and snake bites.”

The UN humanitarian chief said the Government and people of Niger have shown “enormous generosity and humanity” in hosting refugees and internally displaced persons fleeing violence, not only in the Lake Chad Basin but also in the west, where people have fled insecurity in Mali.

Niger has been an active international partner in efforts to address the crises in both the Lake Chad Basin and the Sahel, according to OCHA.

“Niger has done so much right, but faces enormous challenges,” he pointed out, noting that, like other countries across the Sahel, it grapples with insecurity, climatic shocks, extreme poverty and the lack of basic services and infrastructure.

“Together with our humanitarian efforts, Niger needs increased support from development partners, especially to educate its young population and enable them to get jobs. We must tackle the root causes of the crisis alongside the immediate priority of saving lives and protecting people,” he added. 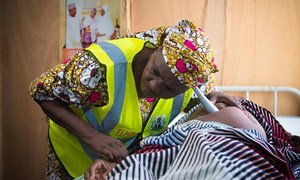 In conflict-affected Nigeria, UN agency teams with health workers to help the displaced