UNHCR/Rui Padilha
Families who fled militia attacks in Kasai Province in the Democratic Republic of the Congo arrive at the newly established Lóvua settlement in northern Angola.
8 September 2017

Despite improvements in the security situation in conflict-affected parts of the Democratic Republic of the Congo, the return to peace continues to be fragile and the return of the displaced populations remains fraught with challenges, the United Nations refugee agency said.

“Despite the critical situation, some Congolese who had sought refuge in Angola are trying to return to their homes in Kasaï,” Cécile Pouilly, a spokesperson for the Office of the UN High Commissioner for Refugees (UNHCR), told journalists at a news briefing in Geneva today.

However, many of those spontaneously returning to their origins saw their homes destroyed and are now forced to live in internal displacement-like conditions.

“UNHCR staff saw entire villages burnt down and civilians in a dire situation, as basic services had largely stopped and lawlessness prevailed,” she added, relaying information gathered by the UN agency’s field mission to the area.

In the area near the border town of Kamako, nine out of ten villages had been burnt down in attacks by armed groups or fighting between them and Government forces. In addition, health posts, schools and public buildings were systematically destroyed or pillaged by local armed groups.

Children were the ones worst affected and hundreds have been separated from their families or witnessed their murders. Equally precarious is the situation of the elderly, those needing medical attention and persons with disabilities.

UNHCR’s response in the country is hampered by lack of resources. Of the $102.5 million needed, only about 17 per cent has been received. Lack of access is also causing significant difficulties.

The Kasaï crisis had begun over a year ago, spreading from local tensions to a conflict affecting nine out the 26 provinces of the African nation. Since April 2017, some 33,000 refugees fleeing the conflict had been registered in the country’s Lunda Norte province, according to UNHCR. 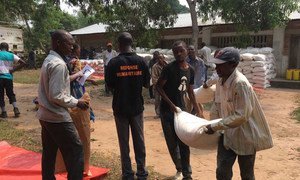 Food assistance will be provided to food insecure people displaced by conflict in the Kasai region of the Democratic Republic of the Congo (DRC), says the United Nations food agency.