Guy Oliver/IRIN
A former Al-Shabab fighter at a rehabilitation centre in Baidoa.
7 September 2017

Deprivation, marginalization and perceived state violence or abuse of power are pushing young Africans into the clutches of violent extremism, a groundbreaking study by the United Nations Development Programme (UNDP) reveals.

“This study sounds the alarm that as a region, Africa’s vulnerability to violent extremism is deepening,” Abdoulaye Mar Dieye, UNDP Africa Director, said today at the launch of the report in New York.

“Borderlands and peripheral areas remain isolated and under-served. Institutional capacity in critical areas is struggling to keep pace with demand. More than half the population lives below the poverty line, including many chronically underemployed youth.”

Exploring the factors that shape the dynamics of the recruitment process, prompting some individuals to gravitate toward extremism, where the vast majority of others do not, the study Journey to Extremism in Africa: Drivers, Incentives and the Tipping Point for Recruitment, also finds that many who joined faced marginalization and neglect over the course of their lives, starting in childhood.

With few economic prospects or outlets for meaningful civic participation that can bring about change, and little trust in the state to either provide services or respect human rights, the study suggests that such an individual could – upon witnessing or experiencing perceived abuse of power by the state – be tipped over the edge into extremism. 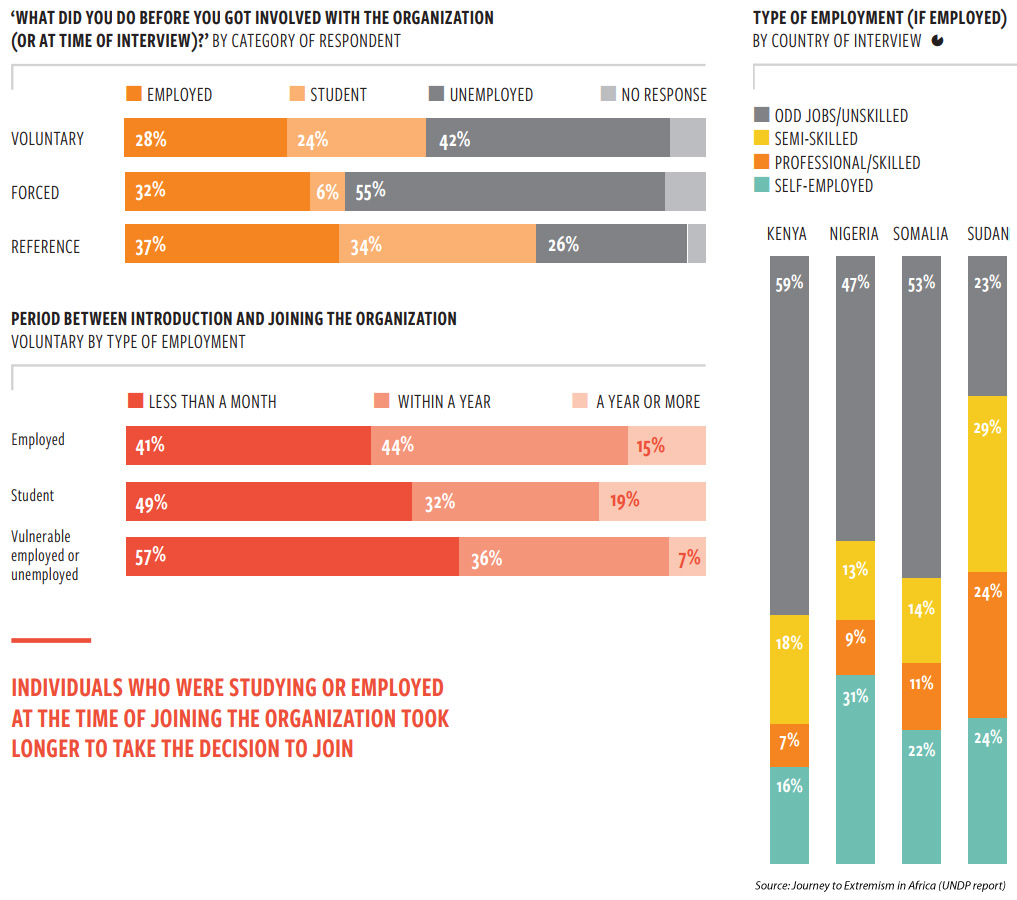 Source: Journey to Extremism in Africa: Drivers, Incentives and the Tipping Point for Recruitment report.

In one of the study’s most striking findings, 71 per cent of recruits interviewed said that it was some form of government action that was the ‘tipping point’ that triggered their final decision to join an extremist group.

The actions cited most often were killing or arrest of a family member or friend. Against this backdrop, the study urges governments to reassess militarized responses to extremism in the light of respect for the rule of law and human rights commitments. It also highlights the importance of focusing on development in addressing security challenges.

Another key recommendation calls for local-level interventions, such as supporting community-led initiatives building social cohesion, as well as amplifying the voices of local religious leaders who advocate tolerance.

However, it cautions that these initiatives must be spearheaded by trusted local actors.

Based on responses to questions including on family circumstances, childhood and education, religious ideologies, economic factors, state and citizenship, the study also finds that:

The report is based on a two-year, in-depth study, including interviews with some 495 voluntary recruits who joined Africa’s most prominent extremist groups, including Boko Haram and Al-Shabaab. According to UNDP estimates, some 33,300 people in Africa have lost their lives to violent extremist attacks between 2011 and early 2016.

Violence perpetrated by the Boko Haram terrorist group alone has resulted in the deaths of at least 17,000 people and displaced millions in the Lake Chad region.

Condemning a series of terrorist attacks in north-eastern Nigeria, United Nations Secretary-General António Guterres has called for those responsible for these “repeated heinous acts” to be brought to justice.