“The latest serious developments require a comprehensive response in order to break the cycle of provocations from the DPRK,” said Jeffrey Feltman, Under-Secretary-General for Political Affairs, in an emergency Council meeting, noting that “such a response must include wise and bold diplomacy to be effective.”

Mr. Feltman, however, stressed the importance of responding to humanitarian needs regardless of the political situation as the people of the DPRK rely on the international community to provide humanitarian assistance.

Today's meeting was the Council's second emergency meeting on the DPRK in less than a week and the tenth time the body has met to discuss the DPRK this year.

On the details of Sunday's event, Mr. Feltman said that the DPRK characterized it as a “perfect success in the test of a hydrogen bomb for intercontinental ballistic missile (ICBM)” and as marking “a very significant occasion in attaining the final goal of completing the state nuclear force.”

He said that it is evident the yield of the device was larger than any of the DPRK's previous nuclear tests and experts have estimated a yield of between 50 and 100 kilotons, or on average more than five times more powerful than the weapon detonated over Hiroshima and at the low end of the yield of a modern thermonuclear weapon.

Citing a DPRK article that stated the hydrogen bomb was “a multi-functional thermonuclear nuke with great destructive power which can be detonated even at high altitudes for super-powerful EMP [electromagnetic pulse] attack,” Mr. Feltman said that “this was a rare reference by the DPRK to the use of EMP,” which, triggered by a nuclear weapon, would aim for widespread damage and disruption to electricity grids and sensitive electronics, including on satellites.

He also drew attention to reports today indicating that the DPRK may be preparing new ballistic missile tests.

“We are alarmed by this dangerous provocation,” he said, noting that Secretary-General António Guterres reiterated his call on the DPRK leadership to cease such acts and to comply fully with its international obligations under relevant Security Council resolutions.

“We will continue to carefully follow the developments and remain in close coordination with the concerned international organizations, Members of the Council and other governments concerned,” he concluded.

United States Ambassador to the UN Nikki Haley said that her delegation will table a draft resolution on strengthening sanctions against the DPRK. 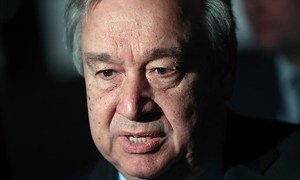 United Nations Secretary-General António Guterres has condemned today's underground nuclear test by the Democratic People's Republic of Korea (DPRK) as “yet another serious breach of the country's international obligations.”