The Security Council today extended the mandate of the United Nations peacekeeping mission in Lebanon for one year.

In a unanimously adopted resolution, the 15-member body requested the Secretary-General to look at ways to enhance the efforts of the UN Interim Force in Lebanon (UNIFIL), including through increasing the mission's visible presence, through patrols and inspections, within its existing mandate and capabilities.

Originally established in 1978, UNIFIL was greatly reinforced after the 2006 fighting to oversee the cessation of hostilities between Israel and the Lebanese group Hizbollah. It is tasked with ensuring that the area between the so-called 'Blue Line' – separating Israel and Lebanon – and the Litani River is free of unauthorized weapons, personnel and assets. It also cooperates with the Lebanese Armed Forces so they can fulfil their security responsibilities.

UNIFIL's initial mandate included confirming the withdrawal of Israeli forces from southern Lebanon, and assisting the Government of Lebanon in ensuring the return of its effective authority in the area.

The Council affirmed its strong continuing commitment to the existing mandate of UNIFIL, also urging all parties to cooperate fully with the Security Council and the Secretary-General to make tangible progress towards a permanent ceasefire and a long-term solution as envisioned in resolution 1701, which helped end the 2006 hostilities in Lebanon between Israel and the Hizbollah.

The Secretary-General reiterated that UNIFIL, in close cooperation with the Lebanese Armed Forces, will continue to enhance its operational activities to effectively implement its mandate, and urged the international community to further support the Government of Lebanon in this regard, the Spokesman said.

The Secretary-General also emphasized the need for the parties to build on the prevailing calm, to focus on the goal of a permanent ceasefire and to act proactively to address all outstanding issues in the implementation of resolution 1701 and other relevant Security Council resolutions, Mr. Dujarric added.

VIDEO: Some 450 daily activities – like this one with the Lebanese Armed Forces – by UNIFIL peacekeepers have kept the peace in south Lebanon for 11 long years, benefiting the communities living in close proximity north and south of the Blue Line.

♦ Receive daily updates directly in your inbox - Subscribe here to a topic.
♦ Download the UN News app for your iOS or Android devices.
Lebanon|peacekeeping 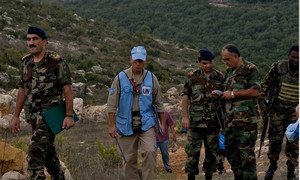 The United Nations Security Council today unanimously extended the mandate of the UN Interim Force in Lebanon (UNIFIL), until the end of August 2017.