The head of the United Nations agriculture agency today called for greater funding for a sustainable response to the refugee crisis in Uganda, as he concluded a visit to the country's north hosting those crossing the border for safety.

The head of the United Nations agriculture agency today called for greater funding for a sustainable response to the refugee crisis in Uganda, as he concluded a visit to the country's north hosting those crossing the border for safety.

“Uganda's refugee model is an example to the world,” said UN Food and Agriculture Organization (FAO) Director-General José Graziano da Silva in a news release, noting that the country allocates land to refugees for shelter and cultivation so that they can provide food for themselves rather than rely on food aid.

“It is vital that funds be mobilized to support this effort […] so that refugees and their host communities can have a real opportunity to overcome hunger and poverty. Uganda is giving not only food and land but hope,” he added.

Uganda is host to the fastest-growing refugee crisis in the world. Since July last year, more than one million South Sudanese refugees have crossed into the country.

The refugees are predominantly women and young people and come from farming or livestock herding communities.

Under a new response plan, FAO is intensifying its efforts in providing livelihood assistance to refugees and host communities. The plan focuses on food and livestock production, nutrition, protecting the environment and enhanced technical support to the Government.

The Director-General's visit comes after UN Secretary-General António Guterres called on the donor community in June to strengthen their support to the refugee response. Uganda requires around $2 billion annually for 2017-2020 to address refugee needs, and donors have so far pledged around $358 million. 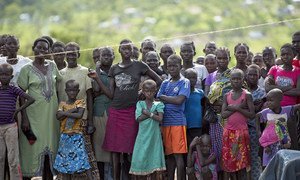 South Sudan, Africa's newest nation, has known no respite since fighting broke out last July, following the collapse of a peace deal between Government and opposition forces, sparking what United Nations agencies report as incidents of “barbaric violence” carried out by armed groups, and a massive spike in the number of desperate people fleeing for safety.