“This turn of events is deplorable. It was predicted and could have been prevented,” said UN High Commissioner for Human Rights Zeid Ra'ad Al Hussein, noting that “decades of persistent and systematic human rights violations, including the very violent security responses to the attacks since October 2016, have almost certainly contributed to the nurturing of violent extremism, with everyone ultimately losing.”

The High Commissioner called on the political leadership to condemn the inflammatory rhetoric and incitement to hatred that is proliferating, including on social media.

Mr. Zeid also expressed concern about claims by the State Counsellor's Office that international aid workers were complicit in or supporting the attacks.

“Such statements are irresponsible and only serve to increase fears and the potential for further violence,” he said. “I am extremely concerned that the unsupported allegations against international aid organizations place their staff in danger and may make it impossible for them to deliver essential aid.”

Mr. Zeid said the perpetrators of the attacks on security personnel must be brought to justice, as must those who have been attacking the civilian population.

State authorities should issue clear instructions to security forces to refrain from using disproportionate force, minimize damage and injuries and respect the right to life, he said.

“The State has a duty to protect those within its territory – without discrimination,” stated Mr. Zeid.

“I call on the Government of Myanmar to follow the recommendations of the Advisory Commission on Rakhine State, headed by Kofi Annan, for an integrated and calibrated response to the situation in Rakhine state, to address rather than sacrifice human rights concerns in the interests of maintaining peace and order,” he said.

Meanwhile, the Office of the UN High Commissioner for Refugees (UNHCR) today communicated to the Government of Bangladesh its readiness to support the country in assisting refugees crossing the border.

As of Sunday, it was estimated that some 5,200 people had entered Bangladesh from Myanmar since Thursday. Several thousand were reported to be in locations along the Myanmar side of the border.

The agency is aware of several reported instances of people being prevented from entering Bangladesh. UNHCR believes it is of the utmost importance that Bangladesh, which has hosted refugees from Myanmar for decades, continues to allow Rohingya fleeing violence to seek safety there.

UNHCR also called on the international community to support Bangladesh in doing so, with all necessary aid and other help. 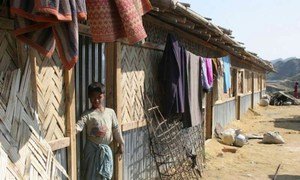 Deeply concerned at the reports of civilians being killed during security operations in Myanmar's Rakhine state, United Nations Secretary-General António Guterres today reiterated the responsibility of the Government to provide security and assistance to those in need.