Briefing journalists in Geneva, UN Special Adviser Jan Egeland said the five neighbourhoods held by ISIL in Raqqa are heavily shelled from the surrounding and encircling forces, and under constant air raids by the Coalition.

“Now is the time to think of possibilities, pauses or otherwise that might facilitate the escape of civilians, knowing that Islamic State fighters are doing their absolute best to use them as human shields,” Mr. Egeland said. “I cannot think of a worse place on earth now than in these five neighborhoods and for these 20,000 people.”

He urged members from the Humanitarian Task Force, including the members of the Coalition that is supporting the retake of Raqqa, to “do whatever is possible to make it possible for the people to escape.”

The International Syria Support Group (ISSG) established the respective taskforces on humanitarian aid delivery and a wider ceasefire. They have been meeting separately since early 2016 on a way forward in the crisis. Russia and the United States are the co-chairs of the taskforces and the ISSG, which also comprises the UN, the Arab League, the European Union and 16 other countries.

Mr. Egeland went on to note that the difference between the situation in Raqqa and that in Aleppo or other besieged areas was that that UN had contact with those holding those neighbourhoods.

“There is not a two-way communication, and there seems to be a very deliberate policy of holding people, and using them as human shields. But this is the time to try anything to allow their safe escape,” he said, adding that few people are leaving now out of fear of death.

More than 260,000 people from the northern Iraqi city escaped and are receiving aid from 50 concentration points. Inside the city, however, conditions are “very bleak” and “it is very hard to assist.”

The senior UN official also noted the situation in Deir ez-Zor, the town where forces are encircling, and which is believed to be home to some 90,000 people.

“Extreme caution now also there has to be exercised, not to make it in anyway worse, for the civilian population,” he said.

Among other locations mentioned in his briefing, Mr. Egeland said it was “heart-breaking” that aid was not allowed in to Fou and Kefraya, as well as Yarmouk, the Palestinian camp near Damascus, as had been agreed, after parties changed their minds.

Earlier in the briefing, UN Deputy Special Envoy for Syria Ramzy Ezzeldin Ramzy reiterated Special Envoy Staffan de Mistura's support and appreciation for the international humanitarian task force, and countries who have worked with the parties to the conflict to allow in aid.

Mr. de Mistura is expected to brief the Security Council on political developments in relations to Syria on Wednesday, 30 August.

AUDIO: Jan Egeland, Special Advisor to UN Special Envoy Staffan de Mistura, says that needs are "beyond belief" for thousands of civilians trapped in the Syrian city of Raqqa. 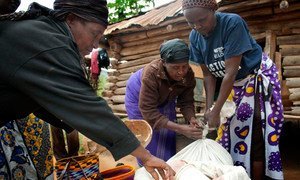