The United Nations body monitoring implementation of the global convention on prohibiting racial discrimination has called on high-level politicians and public officials of the United States to unequivocally and unconditionally reject and condemn racist hate speech and crimes in Charlottesville and throughout the country.

“We are alarmed by the racist demonstrations, with overtly racist slogans, chants and salutes by white nationalists, neo-Nazis, and the Ku Klux Klan, promoting white supremacy and inciting racial discrimination and hatred,” said Anastasia Crickley, Chairperson of UN Committee on the Elimination of Racial Discrimination (CERD), in a news release.

In a decision issued under its 'early warning and urgent action' procedure, the Committee, which monitors implementation of the International Convention on the Elimination of All Forms of Racial Discrimination, stated “there should be no place in the world for racist white supremacist ideas or any similar ideologies that reject the core human rights principles of human dignity and equality.”

The United States ratified the Convention in 1994.

In addition to the criminal investigation of the individual who ploughed his car into a crowd of peaceful protestors killing a woman, the UN experts asked the US authorities to undertake concrete measures “to address the root causes of the proliferation of such racist manifestations.”

“We call on the US Government to investigate thoroughly the phenomenon of racial discrimination targeting, in particular, people of African descent, ethnic or ethno-religious minorities, and migrants,” added Ms. Crickley.

CERD also called on the Government to ensure that the rights to freedom of expression, association and peaceful assembly are not exercised with the aim of destroying or denying the rights and freedoms of others, and also asked it to provide the necessary guarantees so that such rights are not misused to promote racist hate speech and racist crimes.

Members of CERD are independent human rights experts drawn from around the world, who serve in their personal capacity and not as representatives of States parties. 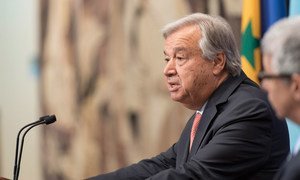 Urging people everywhere to speak out against hate speech and hate crimes, United Nations Secretary-General António Guterres today reiterated his call for tolerance, respect for the other and the importance of recognizing diversity.