The United Nations children agency today expressed extreme concern at the appalling increase in the cruel and calculated use of children, especially girls, as “human bombs” in north-east Nigeria.

“Since the beginning of January 2017, 83 children had been used as so-called human bombs, 55 being girls, most of them often under 15 years old,” UN Children's Fund (UNICEF) spokesperson Marixie Mercado told reporters at today's regular press briefing in Geneva.

“The 27 other children were boys and one was an infant strapped to a girl,” she continued.

She pointed out that since 2014, children have been repeatedly used in this way, calling the number of children used so far this year alone was “already four times higher than what it was for all of 2016.”

“Children used as human bombs are, above all, victims, not perpetrators,” Ms. Mercado underscored.

She went on to say that the use of children in such attacks has a further impact of creating suspicion and fear of children released, rescued, or escaped from Boko Haram. “They face rejection when they tried to reintegrate their communities which compounds their suffering,” she explained.

Ms. Mercado painted a dire picture, describing the situation as a massive displacement and malnutrition crisis – “a deadly combination for children.”

She said that per cent of the persons displaced by the insurgencies in north-east Nigeria are children, and the vast majority of them in Borno state, where most of those attacks are taking place.”

North-east Nigeria is one of the four countries or regions facing the spectre of famine, with up to 450,000 children at risk of severe acute malnutrition this year, according to UNICEF.

UNICEF is providing psychosocial support for children who had been held by Boko Haram and the agency is also working with families and communities to foster the acceptance of returned children – including through social and economic reintegration support.

As of July, UNICEF has supported more than 3,000 children and 1,200 women. It also backed reconciliation activities in north-east Nigeria led by communities, religious leaders and influential women to help promote tolerance, acceptance, and reintegration.

Noting that a $1 billion dollar appeal to minimally help sustain people in Nigeria is only 60 per cent funded, Jens Laerke, Spokesperson for the UN Office for the Coordination of Humanitarian Affairs, told reporters at the briefing that the situation for civilians in the area was extremely grave.

Humanitarian Coordinator Edward Kallon stressed that women and children in Borno state face grave human rights violations, including sexual and gender-based violence. He noted that, since the start of the conflict in 2009, more than 20,000 people had been killed with thousands of women and girls abducted and abused.

In total, 8.5 million people in the worst-affected states of Borno, namely Adamawa and Yobe, need of humanitarian assistance. In its eighth year, this crisis shows no sign of abating, said Mr. Laerke. Food insecurity affects 5.2 million people, some of whom are on the brink of famine. 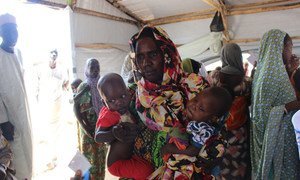 The United Nations humanitarian agency fighting hunger has begun transporting food assistance to Nigeria's crisis-hit north-east, where people – displaced by Boko Haram violence and the fight against it – face the threat of famine.