More than 350,000 children vaccinated against polio in hard to reach areas of Syria – UN

A United Nations polio vaccination campaign in Syria has provided protection to more than 355,000 children under age five in two governorates, where violence has made access especially difficult.

In response to a recent outbreak of vaccine-derived polio in the country, the UN Children's Fund (UNICEF), the World Health Organization (WHO) and partners have completed the first round of a vaccination campaign in the Deir ez-Zor and Raqqa governorates.

“UNICEF applauds local partners and health workers for their extraordinary efforts and commitment to vaccinate children against this crippling illness,” said Fran Equiza, UNICEF Representative in Syria in a statement.

“No child should have to live with the devastating effects of polio,” she added.

This is the second polio outbreak to hit Syria since the start of the conflict in 2011. The continued violence has devastated its health infrastructure and severely disrupted routine immunization services, particularly in Deir ez-Zor and Raqqa.

Prior to the crisis, Syria was polio-free, with an immunization rate over 80 per cent. National vaccination coverage is now just over 40 per cent.

“As of 18 August 2017, 33 children under the age of five have been paralyzed,” said Elizabeth Hoff, WHO Representative in Syria.

“The detection of the circulating vaccine derived polio virus type 2 cases demonstrates that disease surveillance systems are functional in Syria,” she continued. “Our priority now is to achieve the highest possible polio immunization coverage to stop the circulation of virus.”

To vaccinate every child in need, UNICEF ran an outreach campaign and provided the vaccines and essential cold chain equipment. WHO has trained more than 1,000 field volunteers, transported the vaccines to the conflict-affected area, and funded the implementation of the campaign.

UNICEF and WHO said they will continue engaging with local partners and health personnel in Raqqa and Deir ez-Zor Governorates to protect all children from polio.

Both agencies also call on all parties to the conflict to allow vaccinators full access to children in need. 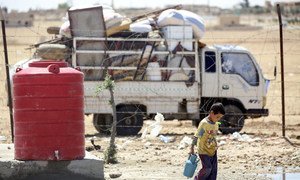 Syria: UNICEF warns 40,000 children in the line of fire in Raqqa

An estimated 40,000 children are trapped in extremely dangerous conditions in Raqqa as fighting intensifies in and around the Syrian city, the United Nations Children's Fund (UNICEF) reported today, warning that “many are caught in the crossfire.”