FAO/Olivier Asselin
A woman purchasing cabbage from a farmer in a vegetable field in Lubumbashi, Democratic Republic of the Congo.
14 August 2017

More than one in ten people living in rural areas of the Democratic Republic of the Congo (DRC) are hungry due to escalating and prolonged conflict and displacement, United Nations agencies today reported, warning that the situation will worsen unless urgent support comes in time.

In a new report, the UN agencies said that between June last year and June this year, the number of people in “emergency” and “crisis” levels of food insecurity – levels that precede “famine” – rose by 1.8 million, from 5.9 million to 7.7 million.

The Integrated Food Security Phase Classification (IPC) analysis released today also notes that the humanitarian situation has worsened due to the spread of fall armyworm infestations, and cholera and measles outbreaks.

In conflict-ridden areas, over 1.5 million people are facing “emergency” levels of food insecurity according to the IPC report, which means people are forced to sell everything they have and skip or reduce their meals.

“In conflict-ridden areas, farmers have seen their villages and fields pillaged. They have not been able to plant for the last two seasons. There is a lack of local markets providing for their food needs,” said Alexis Bonte, FAO Representative ad interim in DRC.

“The situation is set to get worse if urgent support does not come in time.”

Farmers, especially those displaced – the majority of whom are women and children – are in urgent food aid, as well as in need of tools and seeds so that they can resume farming, the UN agencies said.

In several areas, people only eat once a day. The meal is often based on corn, cassava or potatoes, which does not meet their daily nutritional and calorie needs.

“In some cases, diets are limited to starches and leaves,” FAO and WFP said.

Chronic malnutrition affects 43 per cent of children under five – more than 7 million – in DRC, according to the report.

The situation is particularly difficult in the Kasai region, where growing insecurity has worsened the poverty and food insecurity.

“FAO and WFP call for an urgent increase in the provision of lifesaving food and specialized nutrition assistance to combat malnutrition as well as seeds and tools so that farmers can plant again and regain their livelihoods,” the UN agencies said. 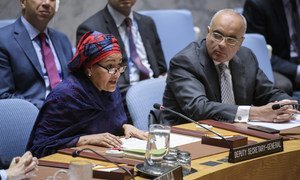 Investing in women and girls must be central to global efforts towards sustainable peace and development in both Nigeria and the Democratic Republic of the Congo (DRC), the United Nations deputy chief said today.