UNHCR/Tania Bulakh
A 79-yaer old retiree crosses a checkpoint in the village of Marinka in eastern Ukraine. Her journey to collect her social benefit payments and access medical care for her disabled son involves several buses and waiting in line to cross the de facto border.
11 August 2017

As the conflict in Ukraine enters its fourth year, nearly 1.6 million internally displaced people are struggling to find safety, adequate housing and access to employment, according to the United Nations refugee agency.

“Sporadic exchanges of fire in areas near the line of contact continue to damage civilian infrastructure, leading to new humanitarian needs and creating risks of displacement,” said Andrej Mahecic, spokesperson for the Office of the UN High Commissioner for Refugees, at today's regular press briefing in Geneva.

“Safety and security remain major concerns for nearly 800,000 people living near the Line of Contact in the Donetsk and Luhansk regions in the country's east,” he added.

In June, the State Border Guard Service of Ukraine recorded more than 1.1 million crossings of the dividing line in eastern Ukraine – sparking UNHCR's concern about difficulties over civilians' freedom of movement, particularly while crossing the conflict line.

“There are frequently long queues and subsequent delays at checkpoints. Those waiting to cross have limited access to basic services, such as drinking water, latrines, weather shelters and medical care,” the spokesperson noted.

Mr. Mahecic pointed out that this creates additional hardships for those with limited mobility and specific needs, especially older people and mothers with children making the journey.

“Since the beginning of 2016, nearly 586,000 retired and elderly people residing in the conflict zone lost access to their pensions as a result of verification procedures introduced by the Government of Ukraine. This has affected the most vulnerable groups, as many of them depend on pensions and social payments as their sole source of income,” he stated.

“Those living in non-Government controlled areas are required to register as internally displaced persons with the Ukrainian authorities in order to have access to their rightful pensions and social payments,” he continued.

UNHCR and partners advocate for displaced people to have full access to Government services and payments, and de-linking pensions and social benefits from residences.

The agency also maintains that at least 40 communities near the dividing line have limited access to medical services – with some 150 healthcare facilities damaged since the start of the conflict – and medical personnel have left the area.

Noting that in 2017, UNHCR helped to repair 89 schools, Mr. Mahecic stressed that “children in affected zones have limited access to education due to the security situation and damaged school buildings” with at least 700 damaged since the conflict began, including 55 schools this year alone.

Along with problems of security, access to basic services, and livelihoods, residents of frontline communities told of civilian houses being used for military purposes.

“The stationing of combatants and weapons in residential areas places civilian populations at risk during fighting,” Mr. Mahecic underscored.

In conclusion, the spokesperson stressed that UNHCR continues to call on all conflict parties to protect civilians and their communities from fighting and shelling, and to restrict the use of civilian homes for military purposes. 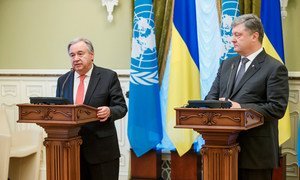