Investing in women and girls must be central to global efforts towards sustainable peace and development in both Nigeria and the Democratic Republic of the Congo (DRC), the United Nations deputy chief said today.

“Both have dismayingly low levels of women's political participation and are experiencing conflicts marked by extremely high levels of sexual- and gender-based violence,” said Deputy Secretary-General Amina J. Mohammed as she updated the Security Council on her recent trip to the two African countries.

The trip, from 19 to 27 July, was “the first of its kind” because it focused entirely on the role of women in peace, security and development, she said.

The mission's goal was to advance peace by advancing the equality, empowerment and well-being of women, which is in line with the Secretary-General's vision and the relevant Security Council resolutions.

In both countries, Ms. Mohammed noted, the mission met with Heads of State, ministers, donors, diplomats, faith leaders, parliamentarian and the respective UN mission and country teams, spending the lion's share of time with the women and girls most affected by conflicts, including through visits to camps for internally displaced persons.

While each country is unique, the situations share some commonalities, she said, noting that sexual violence is widespread in the DRC, and abductions, forced marriage and the use of women as suicide bombers have taken a terrible toll in northern Nigeria, where in the camps sexual exploitation, including in the form of “sex for food” is a new and alarming trend.

“The international community needs to better understand the role of women in development and peace building alongside the gender dimensions of conflict if our responses are to be effective,” she said.

Turning to country-specific matters, the UN deputy chief said that the mission was touched by the meeting with the schoolgirls, who were abducted in Nigeria's Chibok and then released, after years in captivity, by the Boko Haram group.

“Their remarkable strength as survivors rather than victims is inspiring. Many are receiving education and psychosocial support to prepare them for reintegration,” Ms. Mohammed said, noting that thousands of other young women who have been subjected to sexual violence and affected by conflict in other ways are still to receive adequate support. 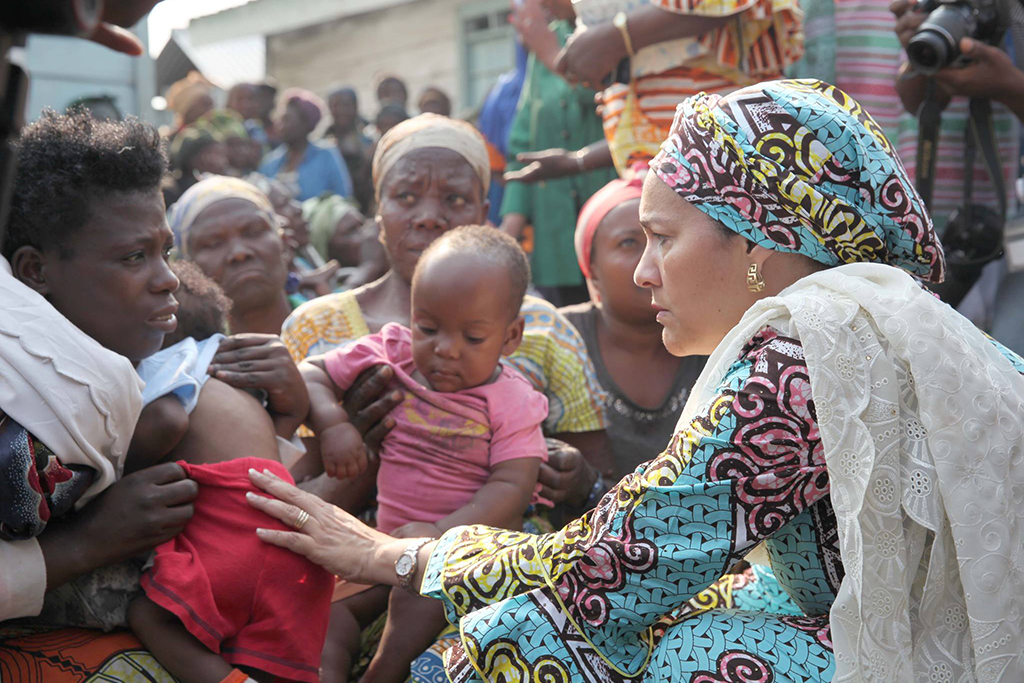 Deputy Secretary-General Amina Mohammed visited the Democratic Republic of Congo (DRC) as part of her joint AU-UN high-level trip. During her visit to the Mugunga camp for internally displaced persons (IDP), she said that she is committed to ensuring that women can return in “dignity and humanity, which is not a favour but a right.” UN Photo/Myriam Asman. 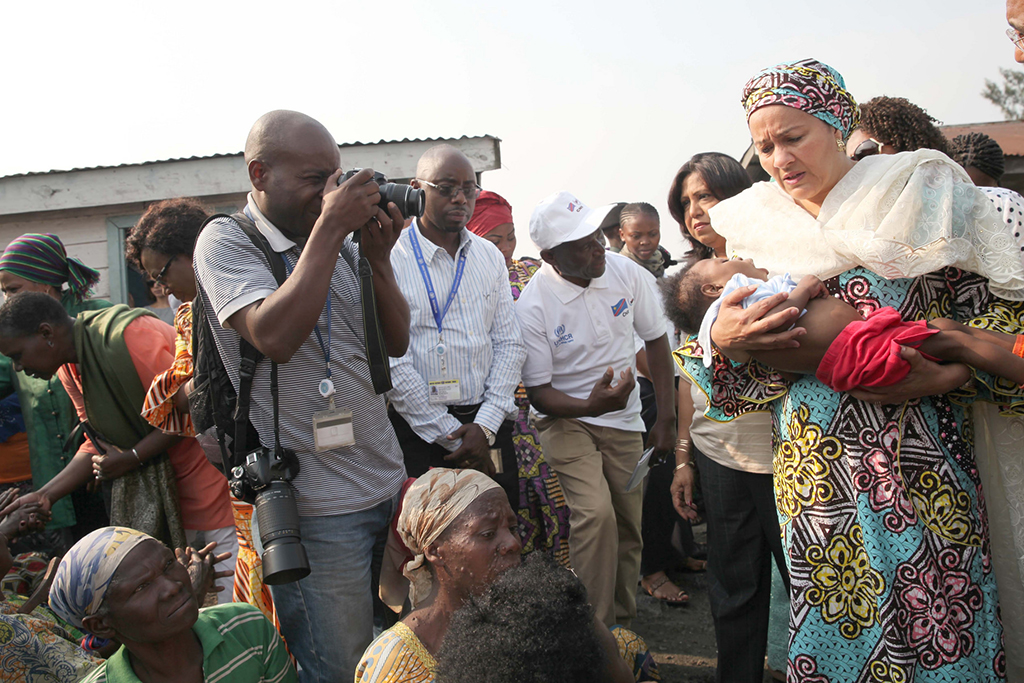 The Mugunga camp for internally displaced persons (IDPs) is located in Goma, North Kivu Province, in the Democratic Republic of the Congo (DRC). Deputy Secretary-General Amina Mohammed’s visit to the camp was part of a four-day trip focused on the fight against sexual violence and the advancement of women. UN Photo/Myriam Asman 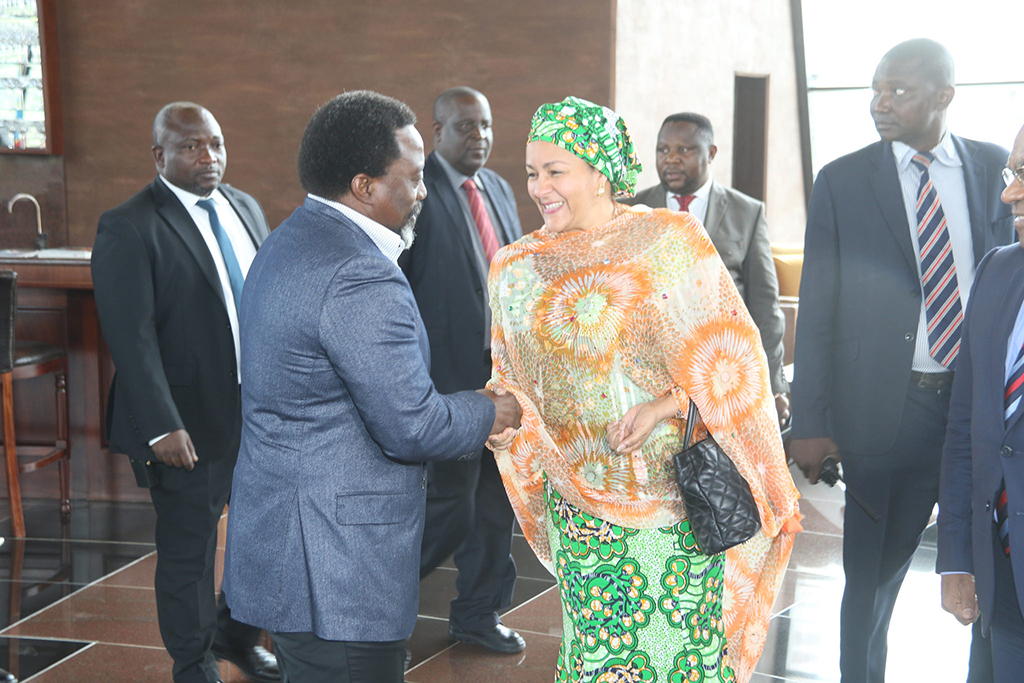 In Kinshasa, the capital of the Democratic Republic of the Congo (DRC), Deputy Secretary-General Amina Mohammed was received by President Joseph Kabila at the presidential pavilion of N'djili International Airport. Photo: UN Photo/John Bompengo 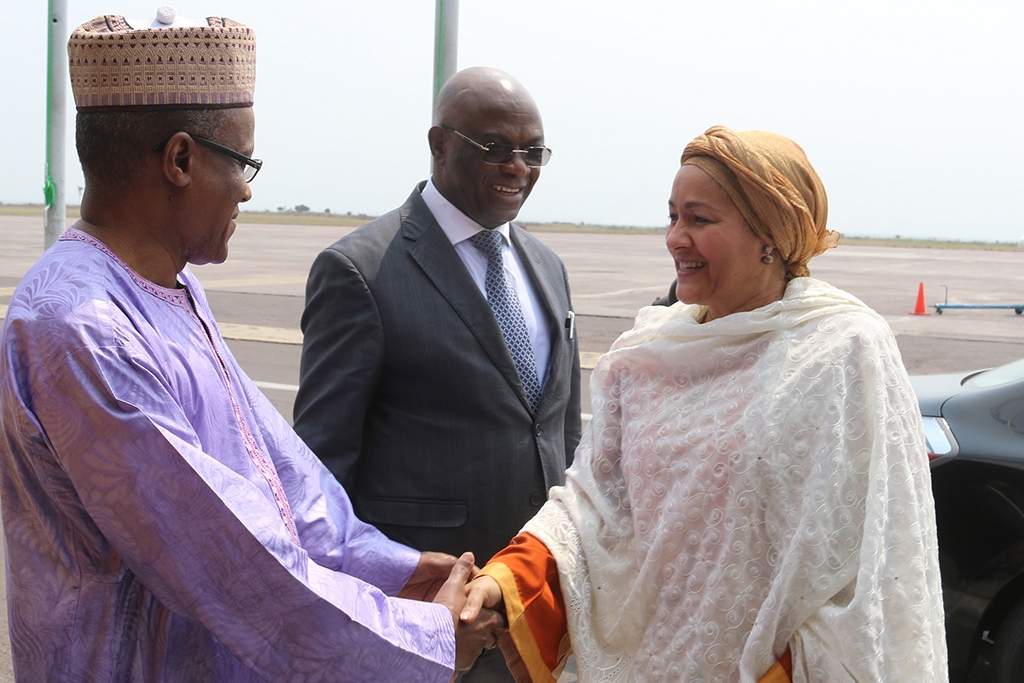 At the airport, Deputy Secretary-General Amina Mohammed was welcomed on arrival by Maman S. Sidikou, Head of the UN stabilization mission in the Democratic Republic of the Congo, known as MONUSCO. UN Photo/John Bompengo 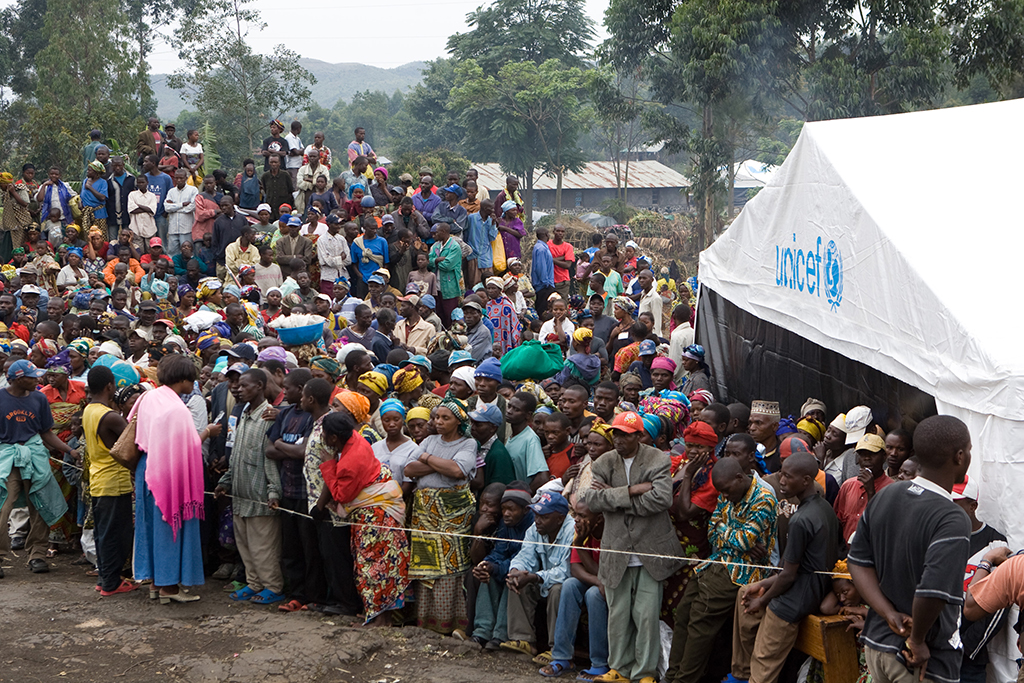 The UN has a long standing presence in the Muganga camp. This photo is taken in 2007, as internally displaced persons (IDPs) line up for food distribution, supplied by WFP. UN Photo/Marie Frechon 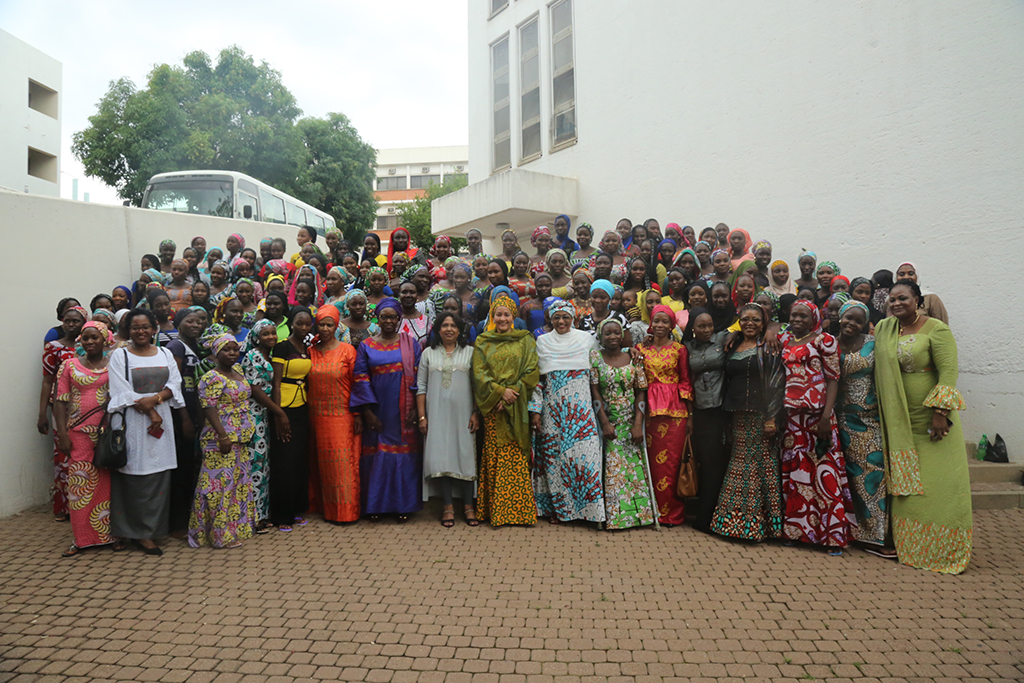 Prior to Deputy Secretary-General Amina Mohammed’s visit to the Democratic Republic of the Congo (DRC), she spent several days in Nigeria. In this photo, she is pictured in Abuja with Nigerian women leaders, as well as women and girls affected by conflict in the north-eastern part of the country. On the same day, the UN deputy chief told reporters that action is needed now towards the meaningful participation of women in peace processes, as well ensuring their voices are heard in all aspects of society. UN Photo/Lulu Gao 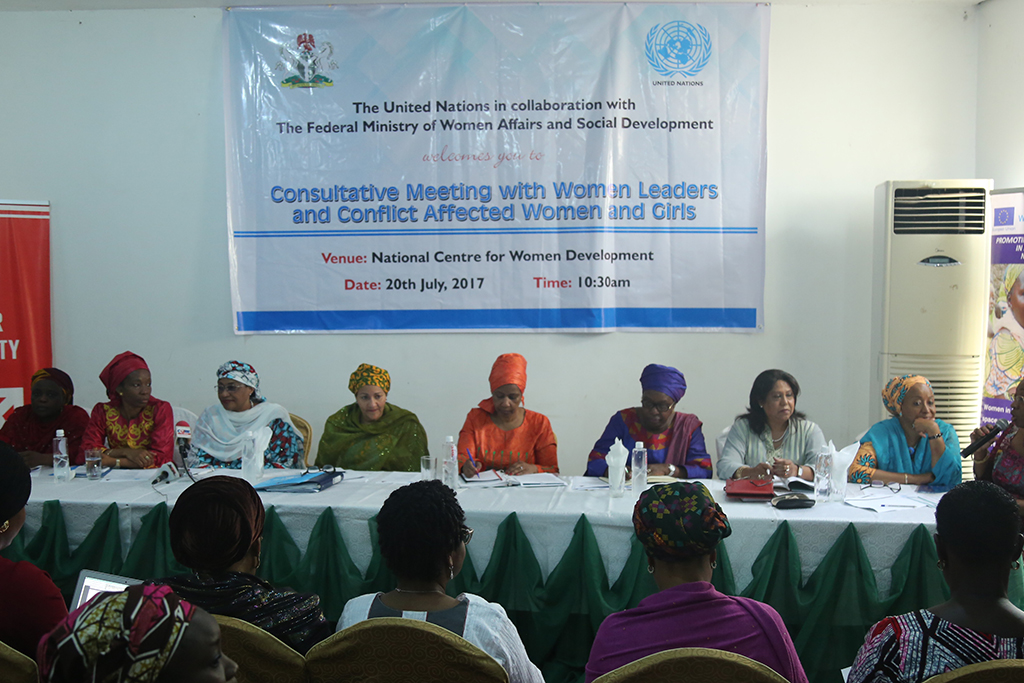 In the DRC, the mission emphasized the need to respect and implement the 31 December agreement, which provided a clear path towards democratic elections, she noted.

At the time of her visit, Ms. Mohammed said the electoral commission had registered more than 80 per cent of voters. That number now stands at more than 90 per cent. Of those registered, 48 per cent are women, placing the country in the same bracket as more established democracies such as Solomon Islands and Paraguay.

The mission also met with women who have no choice but to cook with coal in their tents, at great risk to their health and that of their children.

“While we may debate the humanitarian-development nexus philosophically here in New York, without resources flowing to both sectors simultaneously and a real investment in early recovery, we can neither sustain peace nor prevent future gender based violence,” she said, encouraging donors to respond to the DRC's reintegration challenges based on need alone.

The United Nations deputy chief wrapped up her visit to two African countries – Nigeria and the Democratic Republic of the Congo – where today she stressed the importance of women's participation in peace, security and development processes.