With better commodity export prices and an improved international context, the Latin America and the Caribbean region will record a small positive growth rate this year – with the exception of Venezuela and two Caribbean countries, according to a new report of the UN Latin America commission.

The Economic Survey of Latin America and the Caribbean 2017 foresees that, after two years of contraction, nearly all countries in the region will experience, on average, 1.1 per cent positive growth rates in 2017 – except for Venezuela, whose gross domestic product (GDP) is seen falling -7.2 per cent; and Saint Lucia and Suriname, which is forecast to contract -0.2 per cent.

“To resume medium- and long-term growth, countercyclical policies are needed that not only focus on reducing the cycle's fluctuations, but also on modifying those specific characteristics that negatively influence growth and the productive structure of countries in the region,” said Alicia Bárcena, Executive Secretary of the Economic Commission for Latin America and the Caribbean (ECLAC), during a press conference in Santiago where the document was presented.

The UN body's annual report underscores the importance of macroeconomic policies to invigorate long-term growth and move toward the necessary structural change in the region's economies.

“This means moving toward countercyclical frameworks for fiscal policy that defend and promote public and private investment. This involves revising fiscal rules so they continue to serve as pro-stability instruments, but also as pro-investment. This fiscal framework must be accompanied by a financial policy aimed at credit stabilization and a monetary policy that supports investment growth and goes beyond instruments such as the interest rate,” she explained.

The Economic Survey analyzes policy challenges to stimulate investment and growth, indicating that in the process of achieving indebtedness and fiscal balance equilibrium, public investment must not be neglected. In that sense, separating the handling of investment spending and current spending would help eliminate the bias against investment in processes of public spending adjustments.

It also notes the importance of strengthening increased public revenue through tax structure changes, with the establishment of more direct taxes; fortifying tax administrations; and reducing evasion and avoidance.

According to the report, as in prior years, different growth dynamics are projected among countries and sub-regions.

While the gross domestic product (GDP) of South America is expected to grow 0.6 per cent this year, the economies of Central America and Mexico are seen expanding 2.5 on per cent on average, thanks to an increase in remittances income and improved growth expectations for its main trading partner, the United States. Meanwhile, 1.2 per cent growth is forecast for English- and Dutch-speaking Caribbean economies, following a -0.8 per cent contraction in 2016.

According to ECLAC, some positive factors affecting the region's performance this year include the moderate recovery of the global economy, which will end 2017 with 2.7 per cent growth, three-tenths of a percentage point higher than in 2016; a slight 2.4 per cent international trade volume rebound; and increased price levels for basic products, which are forecast to be 12 per cent higher on average than last year. At the same time, on spending, a narrow improvement in investment and greater dynamism in private consumption are being observed.

Finally, the 2017 regional account balance is expected to remain similar to that of 2016, around -1.9 per cent of GDP, although with improved trade and an increase in exports, which is forecast at 8 per cent for the entire year. 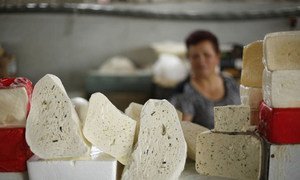