Having witnessed first-hand various security challenges and humanitarian efforts in South Sudan, the United Nations peacekeeping chief has wrapped up his three-day mission to the country, which included a visit to the UN Protection of Civilians site in Malakal, where he expressed the Organization's resolve to support the return to stability.

“We are determined to continue doing our best to help the population,” said Jean-Pierre Lacroix, Under-Secretary-General for UN Peacekeeping Operations said after visiting Malakal.

Mr. Lacroix visited the UN Protection of Civilians (PoC) site in Malakal, where 30,000 people struggle to survive. Since its formation, the internally displaced persons (IDPs) site has offered refuge to countless South Sudanese escaping conflict around their homes.

Troops on the ground briefed him on various security concerns, obstacles and humanitarian efforts underway to assist the local population.

“My visit to Malakal was quite informative on the efforts that are being made to support the population there – the IDPs – but also the population as a whole, irrespective of their affiliation,” he maintained.

Through a translator, one IDP living there since December 2013 said, “in this camp we are secure,” adding “but still we need more security and peace in this country.”

Accompanied by Special Representative of the Secretary-General David Shearer, Head of the UN Mission in South Sudan (UNMISS), the UN peacekeeping chief spoke with local authorities, as well as the UNMISS team and representatives of UN agencies, both on the humanitarian and development sides.

“We had a good meeting with local authorities in Malakal and we agreed that we should continue to work together and increase our cooperation in order to help the return of stability and also generate better opportunities for the population there,” elaborated Mr. Lacroix.

During the meeting, Peter Col Wal, speaker of the Upper Nile state assembly, urged UNMISS to support peace activities in his state.

Briefing the press in Juba

Today in the capital, Juba, after wrapping up his three-day visit to the country, Mr. Lacroix reiterated, at his final press conference, the importance of the initiative led by the Intergovernmental Authority on Development (IGAD) aimed to revitalize the peace agreement.

“Clearly it is a very important and positive thing that the countries in the region are being more engaged in helping South Sudan return to peace,” he said. “The UN has welcomed and supported this new engagement by the IGAD and looks forward to that process moving forward.”

He noted that the UN would continue to closely follow the national dialogue process to ensure that it is conducted in an inclusive and transparent manner, saying that it “can be a helpful instrument in bringing together stakeholders and helping them resolve their differences especially at the local level.”

The peacekeeping chief also called on all parties to stop fighting and to make all efforts towards a cessation of hostilities.

Finally, Mr. Lacroix expressed concern about the dire humanitarian situation and reiterated that the UN is working impartially to help everyone in South Sudan, irrespective of ethnic and religious affiliation.

“The UN is acting impartially in helping everyone in South Sudan, irrespective of their ethnic or religious or any other affiliations. I really appreciate that this impartiality was recognized by the leadership during my meetings with them. So we are determined to continue doing our best to help the population,” he said. 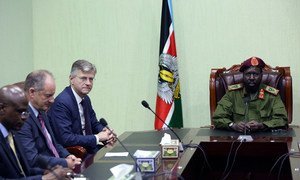