United Nations Security Council sanctions are “a formidable instrument for global peace and security,” a senior UN political official said today, stressing that these measures, when implemented effectively, can contribute to preventing conflict, countering terrorism and constraining the proliferation of nuclear weapons.

“Sanctions are not an end in themselves. At their most effective, sanctions should contribute to a comprehensive political strategy, working in tandem with other Charter-based instruments, to prevent and peacefully resolve conflicts,” said Assistant Secretary-General for Political Affairs Tayé-Brook Zerihoun as he briefed the 15-member Council.

Today's discussion on UN sanctions was held against a backdrop of wide-ranging and sustained challenges to international peace and security.

He said that examining the efficacy of UN sanctions is “timely” because the Organization recently carried out a review of its peace and security architecture.

Today, there are 13 Security Council sanctions regimes on; Somalia and Eritrea; the Islamic State of Iraq and the Levant (ISIL/Da'esh) and Al-Qaida; Iraq; the Democratic Republic of the Congo (DRC); Sudan; the Democratic People's Republic of Korea (DPRK); Libya; Taliban; Guinea-Bissau; the Central African Republic (CAR); Yemen; South Sudan and the one against those suspected to have carried out the February 2005 terrorist bombing in Beirut, Lebanon that killed former Lebanese Prime Minister Rafiq Hariri and 22 others.

Sanctions play various roles. They are intended to deter the unconstitutional change of governments, illicit exploitation of natural resources to fund the activities of armed groups, as well as violations of human rights and international humanitarian law, including sexual violence in conflict. They are also aimed at supporting implementation of peace agreements and peacebuilding efforts.

Mr. Zerihoun went on to say that “sanctions are also a flexible instrument, subject to regular reviews, adjustments and terminations.” Since 1966, the Council has established 26 sanctions regimes, and has terminated 15.

He said the sanctions regimes on ISIL/Da'esh and Al-Qaida, and on the DPRK are “central to international efforts to tackle terrorism and non-proliferation, respectively.”

“Both have been continually adjusted to meet specific and evolving challenges, with due regard to the impact on civilian populations,” he said.

In 2016, three sanctions regimes on Iran, Côte d'Ivoire and Liberia were terminated. As of 31 July, the Security Council's consolidated sanctions list contains 1031 entries – 654 individuals and 377 entities.

Mr. Zerihoun said that sanctions are adopted in New York, but are implemented mainly at border crossings, ports, and airports, as well as in banking and financial institutions, bringing together a multitude of governmental institutions at various levels as well as the private sector.

“Even the best designed UN sanctions resolutions are not self-implementing,” he said, stressing the obligations of those countries to implement these measures while underscoring the need for the Council and its sanctions committees to provide support for Member States, especially to those affected by these restrictions.

♦ Receive daily updates directly in your inbox - Subscribe here to a topic.
♦ Download the UN News app for your iOS or Android devices.
Security 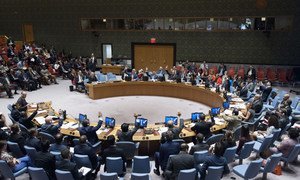