UN/MINUSCA
Chief of the Standing Police Capacity, Maria Appelblom, is greeted by Police Officers during a visit to MINUSCA in Bangui, Central African Republic.
3 August 2017

Over the past 10 years, the United Nations Standing Police Capacity has filled a critical need in global peace operations by providing them with readily available police expertise, according to the outgoing head of the unit, who says she is proud to have played a part in putting the SPC “on the map,” while also highlighting the need to recruit more women officers to carry out this important work.

Over the past 10 years, the United Nations Standing Police Capacity has filled a critical need in global peace operations by providing them with readily available police expertise, according to the outgoing head of the unit, who says she is proud to have played a part in putting the SPC “on the map,” while also highlighting the need to recruit more women officers to carry out this important work.

After the Security Council gives the green light to establish a new peace operation, the staff members serving with the SPC provide start-up capability for the police components within those missions. They also assist existing missions with a wide range of expertise, including in transnational organized crime, community-oriented policing and gender advisory services.

The experts serving with the SPC “assist the mission when there is a gap, maybe a key function that needs to be filled,” explained Maria Appelblom, who has served for three years as the Chief of the SPC and is one of the most senior police women in the Organization.

Tasks performed by the unit include helping to start up missions to assisting with elections. Ms. Appelblom noted, for example, that one of her team leaders filled the position of Police Commissioner of the UN Assistance Mission in Somalia (UNSOM) for seven months.

Female police officers serving with the UN serve as role models for the local population and are vital for helping women in host communities feel secure, Ms. Appelblom stated, while underscoring the need for the Organization to recruit more women for these critical functions.

A strong gender advocate, Ms. Appelblom noted that after a woman has been raped she may not feel comfortable talking to another man. “And in some cultures, it is very difficult for a woman to talk to a man in general,” she added. This is one reason why female police officers are so important within UN peace operations.

“One of the global efforts that the [UN] Police Division is working on is to have an increase in female officers. The aim is 20 per cent by 2020,” she noted.

While some people might say there is too much focus on the numbers, Ms. Appelblom feels that it is important “that we focus on the figures as well as other mainstreaming initiatives because there needs to be a critical mass of women in order to actually influence the situation.”

The Swedish national, who completes her assignment with the UN on 4 August, said she intends to remain involved with efforts to encourage the participation of women in peace operations.

“We have a wide range of initiatives in the pipeline where I am still going to be engaged, where we are going to do further research into the obstacles for female officers to join the UN, both on the national and the UN level,” she stated, alluding to the possibility of piloting a mentorship programme.

She added that she wants to push countries, including her own, to send qualified police officers, especially women, to the UN.

The SPC has helped missions to implement their mandates by working on a host of issues. Ms. Appelblom recalled that the unit has helped with the establishment of police units at the national and local levels to tackle sexual and gender-based violence, and assisted with the recruitment of national police officers, just to name a few of its achievements.

She said she was proud to have her motto realized: “Putting SPC on the map.”

“My greatest achievement is that I’ve been able to enhance the deployments, doing a lot of outreach, making the SPC known,” she said, adding that the requests for the unit’s services are constantly increasing.

Looking toward the future, she hopes that SPC can be a part of the mission “in all of its different phases,” such as peace negotiations, mission start-up, the transition, the drawdown and also working with the country team once the mission has departed. 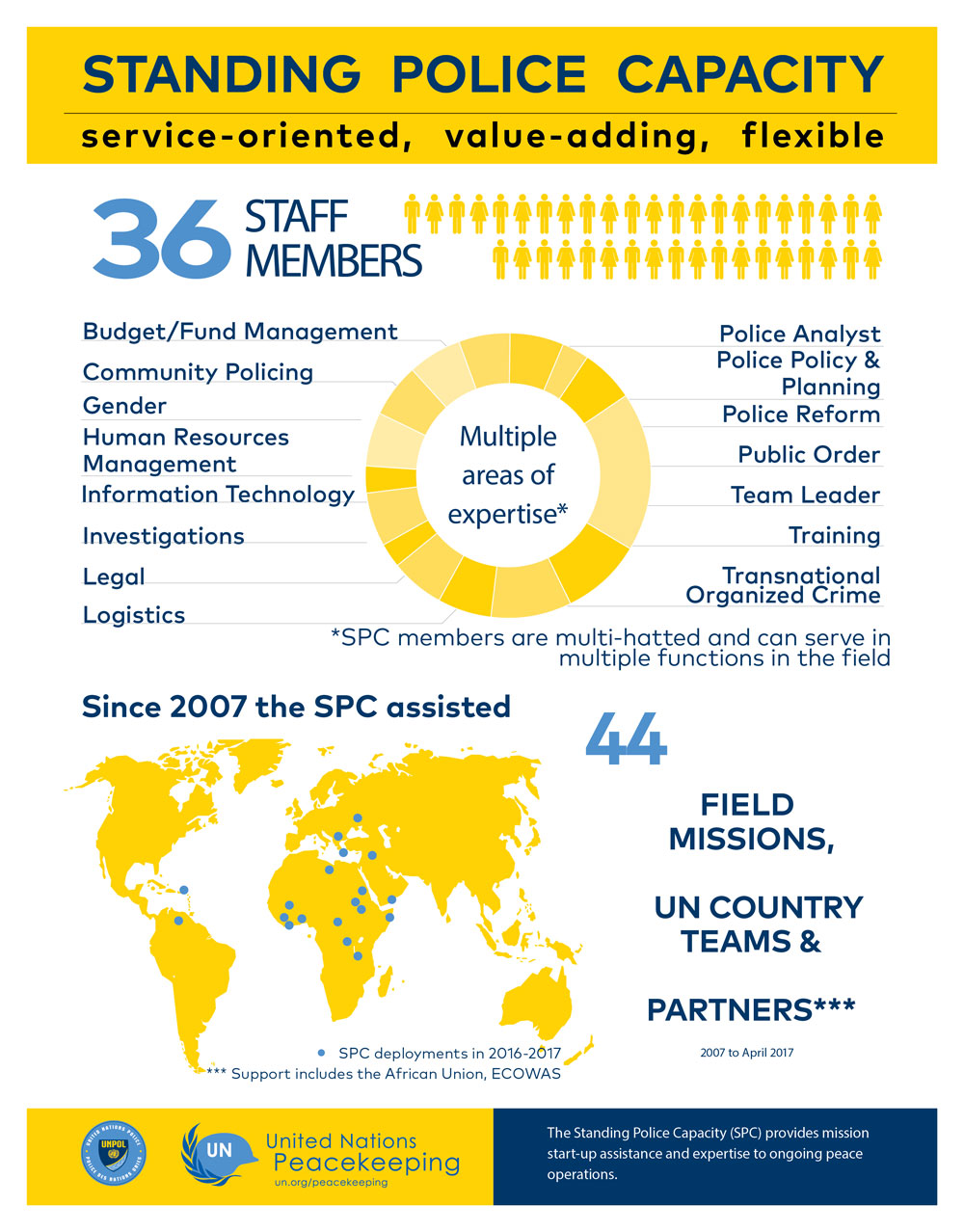 ♦ Receive daily updates directly in your inbox - Subscribe here to a topic.
♦ Download the UN News app for your iOS or Android devices.
peace operations

FEATURE: New challenges spur UN peacekeeping to become ‘a force for the future’