WFP/Justin Smith
Drought has affected residents of the Mbera refugee camp, Mauritania, in the Sahel region of Africa.
3 August 2017

The United Nations human rights office today expressed concern about the ongoing unrest in Mauritania, ahead of the constitutional referendum scheduled for Saturday, particularly the apparent suppression of dissenting voices and the reported use of excessive force by the authorities against protest leaders.

“Protests have been taking place daily since 21 July, led by opposition politicians calling for a boycott of the vote,” said Ravina Shamdasani, spokesperson for the Office of the UN High Commissioner for Human Rights (OHCHR), in a statement.

“The authorities reportedly did not respond to the majority of requests for authorization for the protests and actively dispersed gatherings. In several cases, protest leaders were reportedly beaten up and a number of them were arrested,” she added.

An amendment to Mauritania's constitution, which would abolish the Senate and change the national flag, is put to a vote in the referendum.

Mass protests are planned this afternoon in Nouakchott and reports suggest that the Senate building has been cordoned off by the police and the gendarmerie.

OHCHR urged the Government to ensure that its response to the protests is line with its obligations under international human rights law and to ensure that the rights to peaceful assembly, to freedom of opinion and expression are fully respected.

“These rights are particularly precious in a pre-electoral context,” she said, calling on all sides to refrain from the use of violence and to take measures to prevent the situation from escalating.

The Government has a responsibility to ensure that the elections are held in conformity with the international human rights obligations of Mauritania, and should take all necessary measures to ensure free, transparent and credible elections, she stressed. 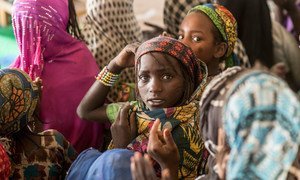 United Nations Secretary-General António Guterres has welcomed the deployment by the so-called Group of Five (G5) – Burkina Faso, Chad, Mali, Mauritania and Niger – of a joint force to tackle the threat of terrorism and organized crime in the Sahel region.