“We discussed the initiative of IGAD towards the revitalization of the peace process,” said Jean-Pierre Lacroix, the UN Under-Secretary-General for Peacekeeping Operations, in the South Sudanese capital, Juba, following a meeting with President Salva Kiir.

Mr. Lacroix, on his first official visit to South Sudan, added there was a convergence of opinion that it was “a good thing” that the countries forming the Intergovernmental Authority on Development (IGAD) are more engaged in helping South Sudan and its people.

The conflict in South Sudan began in December 2013 as a result of political face-off between President Salva Kiir and then First Vice-President Riek Machar. Despite the August 2015 peace agreement, violence has continued. To date, the crisis has left more than 5.5 million people in need of aid and some 1.7 million refugees have also fled to neighbouring countries.

Last month, the IGAD agreed to set up a high-level forum to work across the region to get the South Sudanese peace process back on track.

According to the UN Mission, known as UNMISS, South Sudan's Minister of Cabinet Affairs, Martin Lomuro told the press that “the President sent very clear message on what he would like the UN to do,” noting that the President would like the IGAD, UNMISS or the UN to “reach out to those rebels who are holding citizens hostages and to engage them and to bring them to the table to talk to one another in order to bring peace.”

The peacekeeping chief said that there was a “shared understanding” with the government that “actions and initiatives to advance peace are important” and that they have to be put in place “to accelerate the implementation of the Peace Agreement and bring sustainable peace” to the world's youngest nation.

Mr. Lacroix underlined that the peace process could not move forward if fighting continued. He pledged the continued support of the UN towards providing aid for the most vulnerable people in South Sudan.

“UN humanitarian agencies are doing their best to help South Sudanese and we look forward to further cooperation with the Government so that we can access populations in distress wherever the needs are.” 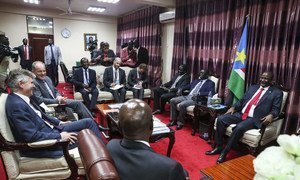 The conflict in South Sudan has to end in order to give the peace process there “a better chance of success,” the top United Nations peacekeeping official said today, kicking off a three-day trip to the African country.