Amid 'political impasse' in Burundi, Security Council urges all parties to cease violence

In a statement read out by Ambassador Amr Abdellatif Aboulatta of Egypt, which holds the Council presidency for August, the 15-nation body underscored deep concern regarding the continued worsening humanitarian situation, “marked by nearly 202,000 internally displaced persons, three million people in need and more than 416,000 Burundians seeking refuge in neighbouring countries […] resulting from the country's persisting political impasse.”

The Council commended the host countries for their efforts, and regional governments “to respect their international obligations relating to the status of refugees, and to ensure that their return is voluntary, based on informed decisions and in safety and dignity.”

It also strongly condemned all public statements inciting violence or hatred towards different groups, “including calls for forced impregnation of women and girls” and urged the Government and all parties to cease all violence and to condemn any hate speech.

The Security Council stressed that the prevailing situation has “seriously undermined” the gains achieved through the 2000 Arusha Agreement, with “devastating consequences for Burundi and the region as a whole.”

The Council reiterated its intention to pursue targeted measures against all actors, both inside and outside of the country, who threaten the peace and security of Burundi and underlined “the utmost importance of respecting the letter and the spirit of the Arusha Agreement” that has helped to sustain a decade of peace in in the nation.

“The Security Council urges the Government of Burundi to reengage with international partners, especially the United Nations, in a constructive manner based on mutual trust,” the statement said.

In that regard, the Council reiterated its concern over significant delays in the deployment of African Union human rights observers and military experts, noting that only 40 of the former and eight of the latter had been deployed to Burundi so far.

Reaffirming the Government's primary responsibility for ensuring security in its territory and protecting its population, with respect for the rule of law, human rights and international humanitarian law, it also called on States in the region to contribute to a solution to the crisis in Burundi and to refrain from supporting the activities of armed movements in any way. 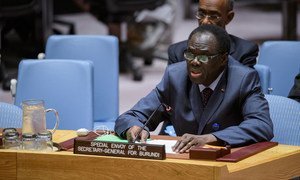 The United Nations Special Envoy to Burundi today urged African leaders, in solidarity with the UN, to support an inclusive dialogue between the Government and the opposition in a country where political upheaval has resulted in insecurity since April 2015.