Boys and girls from a youth-centre in Nairobi, Kenya, expressing their thoughts about their future through Facebook during a UNFPA visit to the Horn of Africa region. UNFPA/Roar Bakke Sorensen (file)

31 July 2017
Mobile broadband subscriptions are expected to reach 4.3 billion globally by the end of 2017, according to a new report released by the United Nations telecommunications agency.

Mobile broadband subscriptions are expected to reach 4.3 billion globally by the end of 2017, according to a new report released by the United Nations telecommunications agency.

New data from the International Telecommunication Union (ITU) also show that 48 per cent of the world's population now uses the Internet. The proportion is 71 per cent for the group of young people aged 15-24.

“ITU's ICT Facts and Figures 2017 shows that great strides are being made in expanding Internet access through the increased availability of broadband networks,” said ITU Secretary-General Houlin Zhao in a press release.

“Digital connectivity plays a critical role in bettering lives, as it opens the door to unprecedented knowledge, employment and financial opportunities for billions of people worldwide,” he added.

Of the 830 million young people online worldwide, 320 million, or 39 per cent, are in China and India, the report finds.

Youth at forefront of Internet adoption

In developed countries, 94 per cent of the youth population uses the Internet, while the proportion is 67 per cent in developing countries and only 30 per cent in LCDs.

The report also reveals that mobile broadband subscriptions have grown more than 20 per cent globally in each of the last five years.

Between 2012 and 2017, the LDCs saw the highest growth-rate of mobile broadband subscriptions. However, the number of mobile subscriptions per 100 inhabitants in these countries remained the lowest, at 23 per cent.

The number of fixed-broadband subscriptions has increased by nine per cent annually in the last five years.

Mobile broadband prices, as a percentage of gross national income per capita, dropped by half between 2013 and 2016.

Mobile broadband is more affordable than fixed broadband in most developing countries.

In 2017, the global Internet penetration rate for men stands at 50.9 per cent compared to 44.9 percent for women.

In the Americas, the number of women using the Internet is higher than that of men.

The report demonstrates that ICTs continue to play an increasingly critical role in achieving the global Sustainable Development Goals (SDGs).

The World Telecommunication Development Conference 2017 will take place 9 to 20 October in Buenos Aires, Argentina, under the theme 'ICT for Sustainable Development Goals.' 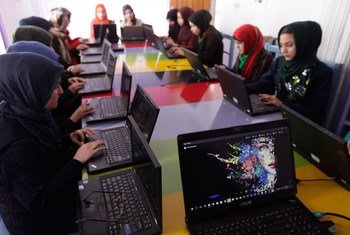 13 July 2017
Underscoring the importance of information and communication technologies (ICT) in today's world, the heads of over 20 United Nations agencies and offices have called for leveraging those technologies to “fast forward” implementation of the 2030 Agenda for Sustainable Development.