A group of United Nations experts has urged the Government of the Philippines to immediately address reported human rights violations, including murder, threats against indigenous peoples and the summary execution of children.

The experts noted that a number of villagers, farmers and human rights defenders seeking to protect the ancestral land of Lumad indigenous peoples against businesses have been reportedly killed, or executed outside the ordinary legal proceedings.

“We urge the Government to ensure effective protection of individuals and groups who may be subject to extra-legal, arbitrary or summary executions, or those who received death threats,” the experts said.

“The Government must also prevent incitement to violence or killings against indigenous communities, human rights defenders and farmers,” they concluded.

The group of UN human rights experts has been in contact with the Government of the Philippines regarding these concerns.

♦ Receive daily updates directly in your inbox - Subscribe here to a topic.
♦ Download the UN News app for your iOS or Android devices.
indigenous people 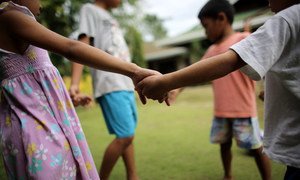 The Government of the Philippines and a rebel group with which it signed a peace accord have made progress in ending and preventing the recruitment of children on the southern island of Mindanao, according to a new United Nations report.