Noting that last Tuesday, well-known activist Tran Thi Nga was sentenced to nine years' imprisonment and five years' house arrest for so-called “anti-State propaganda” for comments posted online, Liz Throssell, spokesperson for the Office of the UN High Commissioner for Human Rights (OHCHR) expressed “serious concerns about the severity of the sentence and the conduct of the trial, which does not appear to have met due process standards.”

“Human rights defenders should never be treated as criminals who are a threat to national security,” she told reporters at the regular bi-weekly news briefing in Geneva.

In accordance with provisions of article 88 of Viet Nam's Penal Code, Tran was kept in incommunicado detention for some six months – from her arrest in January until a few days before the trial. Tran was not allowed adequate time to prepare her defence, the trial lasted just one day and her family and friends were denied entry to the courtroom, according to the UN rights office.

OHCHR pointed out that over the last six months, at least seven other human rights defenders have been arrested and face prosecution, several dozen are currently detained, and two have been deported or sent into exile abroad. Many others have been intimidated, harassed and brutally beaten.

“The Vietnamese Government's failure to address the concerns of the international community about restrictions on fundamental freedoms raises doubts about its commitment to protect and promote human rights,” stressed Ms. Throssell.

“We urge the Vietnamese authorities to immediately release all those detained in connection with their exercise of their rights to freedom of expression, and to amend the overly broad ill-defined laws that are used – under the pretext of national security – to crack down on dissent,” she stated.

♦ Receive daily updates directly in your inbox - Subscribe here to a topic.
♦ Download the UN News app for your iOS or Android devices.
Viet Nam 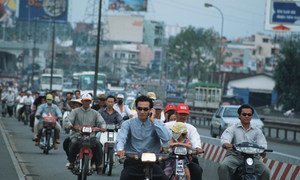 A group of UN human rights experts has urged the Government of Viet Nam to immediately release a popular blogger, known as Mother Mushroom, who has been detained since October last year.