<a href=http://bit.ly/2pWiOlj>Meridith Kohut/IRIN</a>
Shoppers wait in line for five hours to buy a ration of bread from a small bakery in Cumaná, Venezuela.
28 July 2017

The United Nations human rights office expressed deep concern today at the risk of further violence in Venezuela, where elections for a Constituent Assembly convened by President Nicolas Maduro are due to be held on Sunday.

“The wishes of the Venezuelan people to participate or not in this election need to be respected,” Elisabeth Throssell, spokesperson for the Office of the UN High Commissioner for Human Rights (OHCHR) told reporters at the regular press brifing in Geneva.

“No one should be obliged to vote, while those willing to take part should be able to do so freely,” she added.

The OHCHR spokesperson pointed out that demonstrations considered by the authorities to be “disturbing the elections” have been banned until 1 August.

“We urge the authorities to manage any protests against the Constituent Assembly in line with international human rights norms and standards,” she continued, calling on those opposing the election and the Assembly to do so peacefully.

“We hope that the poll scheduled for Sunday, if it goes ahead, will proceed peacefully and in full respect of human rights,” she said.

Responding to questions, Ms. Throssell said the situation in the country is “very tense and difficult.” As such, OHCHR reiterated the call for calm and for peaceful protests and for all sides to use only peaceful means to make their views heard.

With regard to the legitimacy of the vote itself, the spokesperson noted that it is “a hugely controversial issue” amplified by the fact that there had been an unofficial consultation by the opposition on the constituent assembly.

“[Our] Office is concerned about the environment in which the elections are to take place and believes that a constitutional process can only be successful if based on a broad consensus and the participation of all sectors of society,” Ms. Throssell said. 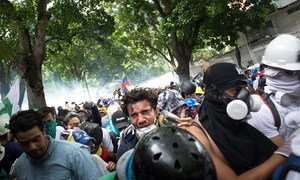 Ahead of Sunday's consultation in Venezuela, UN voices concern for demonstrators

The United Nations today expressed concern about the situation in Venezuela, where nearly 100 people have died since April and more than 1,500 were injured in connection with ongoing protests.