<a href=http://bit.ly/1n4kJCG>Tom Westcott/IRIN</a>
Two soldiers from forces operating under Libya’s Tripoli-based government walking through the deserted streets of Bin Jawad, near the important oil port of Sidra.
27 July 2017

The United Nations Security Council today welcomed the Joint Declaration issued after a meeting between two Libyan political figures and urged all Libyans to support its calls for a negotiated political solution, national reconciliation, and an immediate ceasefire.

The Joint Declaration was issued after a meeting on 25 July between Fayez Al Sarraj, President of the Presidency Council of Libya, and General Khalifa Haftar, Commander of the LNA, hosted in Paris by President Emmanuel Macron.

In its statement, the 15-member Council praised “recent efforts to strengthen an inclusive political dialogue among all Libyans, supported by Libya's neighbours, international partners and regional organizations.”

The efforts are done within the framework of the Libyan Political Agreement endorsed by UN Security Council resolution 2259 (2015), which endorsed the Rome Communiqué to support the Government of National Accord as the sole legitimate Government of Libya.

The statement also stressed the “importance of the United Nations' central role in facilitating Libyan-led political dialogue,” and Secretary-General António Guterres's “personal involvement” in helping to build stability, security, and national unity in the country.

The Council also welcomed the appointment of Ghassan Salame as the new Special Representative of the Secretary-General, succeeding Martin Kobler.

Mr. Salame will head the UN Support Mission in Libya (UNSMIL), which was established in 2011 by the UN Security Council at the request of the Libyan authorities following six months of armed conflict to support the country's new transitional authorities in their post-conflict efforts. 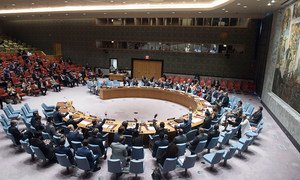 The Security Council today adopted a series of resolutions by which it extended the mandates of United Nations missions in the Golan, the Darfur region of Sudan and Mali, and renewed measures against illicit oil exports in Libya.