ILO/John Hulme
Migrant workers, like these in northern Thailand, often work in high-risk sectors, such as construction. The ILO works to strengthen national occupational safety and health systems to improve protection of migrant workers.
27 July 2017

Access to justice is often out of reach for migrant workers in South-east Asia, the United Nations labour agency reported today in a study that shows non-governmental organizations assisting more often than Government officials or trade unions.

“Barriers to accessing formal assistance are one of the key reasons why migrant workers are vulnerable to labour rights violations during recruitment and employment,” said Tomoko Nishimoto, UN International Labour Organization's (ILO) Assistant Director-General and Regional Director for Asia and the Pacific, in the forward to the report Access to justice for migrant workers in South-east Asia.

The report found that while the estimated 20.2 million migrant workers originating from South-east Asia have equal access to labour rights and social protections in the countries in which they work, “they frequently experience unequal and discriminatory treatment in practice.”

Lack of written evidence, high cost of legal assistance, fear of retaliation and language barriers are among the challenges to accessing justice noted in the report.

The authors argue that there is a substantial and largely unmet demand for fair and responsive remedies in the countries surveyed.

The study is based on complaint case data gathered by Migrant Worker Resource Centres (MRCs) from 2011 to 2015. Detailed information on over 1,000 cases involving more than 7,000 women and men migrant workers was documented in Cambodia, Malaysia, Myanmar, Thailand and Viet Nam, establishing the largest regional dataset of migrant complaints compiled within South-East Asia.

“Migrant workers' vulnerability to exploitation is exacerbated by the absence of fair, efficient and accessible means to resolve grievances when they occur, said says Ben Harkins, ILO Technical Officer and lead author of the report.

Barriers to accessing justice for migrant workers in South-East Asia 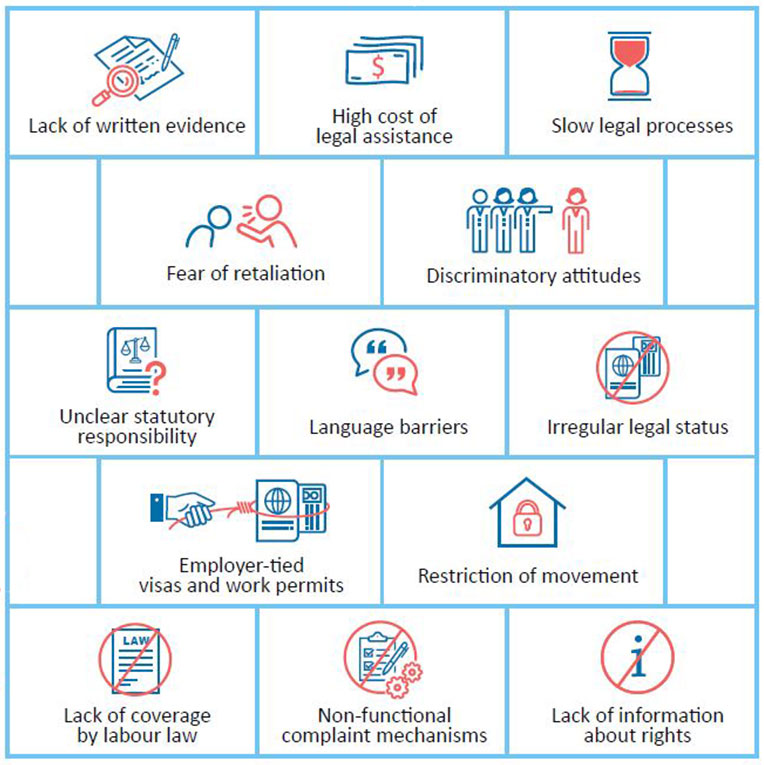 Most migrant workers who are faced with situations of exploitation and abuse seek practical resolutions, such as disbursement of unpaid wages, deployment to destination countries and return of identification documents, ILO reported.

“It is clear that these demands are not adequately met through enforcement of labour and human trafficking laws currently and that greater efforts are needed to ensure that migrant workers are provided with just remedies,” said Mr. Harkins.

Its release comes ahead of the World Day against Trafficking in Persons, marked annually on 30 July.

Although the net benefits of migration far outweigh its costs, the public perception is often the opposite, a senior United Nations official pointed out today, as the latest round of consultations on a global compact for migration began in New York.