OCHA/Ivo Brandau
A former site for internally displaced persons (IDPs) near Kalemie, Democratic Republic of the Congo (DRC) was burned down when it was attacked by a militia group in early July.
26 July 2017

UN High Commissioner for Human Rights Zeid Ra'ad Al Hussein named Bacre Ndiaye, a Senegal national, to lead a team of experts that includes Luc Côté, a Canadian who has worked on human rights violations in the DRC, and Mauritania's Fatimata M'Baye.

The team of experts is expected “to collect and preserve information, to determine the facts and circumstances in accordance with international standards and practice, and while ensuring the protection of all persons who will cooperate with the team, in cooperation with the Government of the Democratic Republic of the Congo,” as stipulated in a mandate by the UN Human Rights Council resolution adopted on 22 June 2017.

The cooperation with the Government includes “facilitating visits and access to the country, sites and persons, concerning alleged human rights violations and abuses, and violations of international humanitarian law in the Kasai regions,” according to the Council.

The resolution refers to reports of the “recruitment and use of child soldiers, sexual and gender-based violence, destruction of houses, schools, places of worship, and State infrastructure by local militias, as well as of mass graves.”

The team's findings are due to be presented to the Human Rights Council in June 2018.

Ahead of the report, the High Commissioner is scheduled to present an oral update on the situation in the Kasais to the Human Rights Council in March of next year.

Violence flared up in the DRC's Kasai regions in August 2016, when a customary chief was killed by Forces armées de la République démocratique du Congo (FARDC), as DRC's armed forces are known. The Kamuina Nsapu militia (named after the chief) then set about avenging the killing, committing widespread atrocities as well as recruiting children into its ranks.

The gravity of the situation was further underscored by the discovery (in April, this year) of forty-two mass graves by OHCHR and the UN mission (known by its French acronym, MONUSCO).

More than 1.3 million people have since been displaced within the country as well as thousands forced to flee across its borders.

Meanwhile, the UN Security Council today warned that unless politicians in DRC demonstrate renewed efforts to deliver on an agreement to hold elections by the end of this year, the country and the wider region faces an increased risk of instability.

“The Security Council further calls upon all political parties, their supporters, and other political actors to remain calm and refrain from violence of any kind,” according to the statement signed by Ambassador Liu Jieyi, who holds the rotating presidency for the month of July.

The presidential statement – which has a tone similar to a Security Council resolution but is not legally binding – expresses concern about “the slow implementation of the 31 December agreement.

The agreement – facilitated by Conférence Episcopale Nationale du Congo (CENCO) mediators, and reached in DRC's capital, Kinshasa, on 31 December 2016 – allowed President Joseph Kabila to stay in power beyond the end of his term.

In today's statement, the Council also welcomed progress made in the voter registration process led by the National Electoral Commission (CENI), and called for continued efforts “to ensure that voters throughout the country, including in the Kasai provinces, are duly registered.”

The Council also called on the Government to set aside a budget for the elections and come up with a timetable for preparations.

In the same agreement, the Council reiterated its condemnation of the violence in the Kasai region and expressed “serious concern” about cases of sexual violence and recent reports of more alleged mass graves.

“The Security Council underscores the primary responsibility of the DRC Government for ensuring security in its territory and protecting its population, with respect for the rule of law, human rights and international humanitarian law,” the statement said, cautioning that some of the reported violations could constitute war crimes under international law. 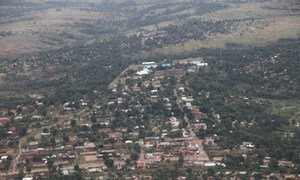 Detailing “harrowing reports” of killings, mutilation and entire villages destroyed in the Democratic Republic of the Congo's restive Kasai provinces, the top United Nations human rights official today called on the UN Human Rights Council to establish an independent international investigation into the widespread rights violations and abuses there.