“Peace is the bedrock – the foundation – to allow us to develop our full potentials, but also to ensure that human rights are respected. Here we see that women's rights, which are human rights, are not respected and we have a long way to go,” said Deputy Secretary-General Amina Mohammed during a press encounter following her meeting with Léonard She Okitundu, Vice-Prime Minister of the DRC, emphasizing that “so much more can be done.”

Ms. Mohammed commended the Government's efforts to combat gender-based sexual violence, noting that having a woman in charge was probably the reason for the progress, “but what we really want to see is zero.”

“We hear what the DRC cannot do. We are here to discuss what [the country] can do with its women and young people,” she stressed, adding that while the rights and aspirations of women “are far from” being attained, it was the job of the UN and AU to support closing the gap.

Ms. Mohammed explained the aim of bringing women leaders into the conversation and engaging with women to find the opportunities to overcome the challenges, “to change the narrative of victims to survivors and aspirations achieved within the 2030 Agenda.”

This call came as Ms. Mohammed leads a first-ever joint AU-UN high-level mission to Africa, seeking to highlight the role of women in achieving sustainable peace and development. She has been accompanied by UN Women Executive Director Phumzile Mlambo-Ngcuka, the Special Representative of the Secretary-General on Sexual Violence in Conflict, Pramila Patten, and the Special Envoy of the AU on Women, Peace and Security, Bineta Diop.

Over the past two days, the delegation met with key members of the Congolese Government, the donor community, as well as women leaders from the civil society. Briefing reporters in the country's capital of Kinshasa, the Deputy Secretary-General said their discussions revolved around “a focus on women, and how we can see women's empowerment, address women's human rights, and women with their rights to the electoral process.”

More broadly, while stressing the need to respect everyone's abilities, she said “there is no one size that fits all,” and added that women's every day rights must be addressed contextually. Indeed: “There is no aircraft that flies anywhere, or bird that flies anywhere, on half a wing,” she underscored, echoing her refrain from other stops on the trip that a critical step towards sustainable development for all is to ensure that women and girls – half the world's population – receive the investments, opportunities, access and protection they require.

Ms. Mohammed went on to say that the UN and the African Union (AU) have each begun another era with new leadership, reforms and frameworks – respectively the 2030 Agenda and its Sustainable development Goals (SDGs) and the 2063 Agenda, both of which have placed women at the core. 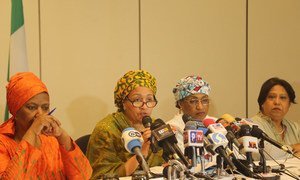 Urgent action is needed now towards the meaningful participation of women in peace processes, as well ensuring their voices are heard in all aspects of society, the United Nations deputy chief told reporters in Abuja today as part of a first-ever UN-African Union trip focused on women, peace and security.