While recognizing that Israelis and Palestinians fortunately “have not succumbed to the torrent of violent upheaval that has engulfed the region in recent years,” Nickolay Mladenov, UN Special Coordinator for the Middle East Peace Process, nevertheless told an open debate in the UN Security Council that: “For nearly a century, despite myriad peace efforts, one conflict has evaded solution.”

His briefing highlighted the latest clashes and rising tensions over the past two weeks in the Old City in Jerusalem. Violence has resulted in deaths on both sides.

These developments “demonstrated the grave risk of dangerous escalation that exists, a risk of turning the Israeli-Palestinian conflict into a religious one and dragging both sides into the vortex of violence with the rest of the region,” Mr. Mladenov said, stressing the need for all parties to show restraint and promptly end this crisis.

Noting that the final status issue concerning Jerusalem needs to be negotiated and decided by the two sides, he urged Israel to fulfill the responsibility to uphold its obligations under international human rights law and humanitarian law. He also urged Palestinian leaders to avoid provocative statements that further aggravate an already tense environment.

The latest incidents have taken place against a backdrop of other developments, the envoy stressed.

Throughout the month, Israel continued to advance its plans to construct settlements in East Jerusalem. “I must once again emphasize that settlement activity in occupied territory is illegal under international law, and undermines the chances for the establishment of a viable, contiguous, sovereign Palestinian state as part of a two-state solution,” he warned.

Palestinians and Israelis must return to an environment conductive to negotiations

Turning to the situation in Gaza, he reiterated that the political standoff between two Palestinian factions – Fatah and Hamas – has taken the two million people living in the tiny enclave “hostage.”

Since violently seizing control of Gaza, Hamas has tightened its grip on power and suppressed dissent, he explained.

The “punishing measures” taken against Hamas, including electricity cuts, have worsened the humanitarian situation in Gaza. “Whatever the political differences between the Palestinian factions, it is not the people of Gaza who should pay the price,” Mr. Mladenov underscored, calling on Palestinian leaders to address the destructive consequences of the split.

Finally, he said recent events are a reminder of how easy it could be to reach a dangerous escalation, and he, expressed hope that Israel's agreement with Jordan and positive engagement with religious authorities would result in actions that would circumvent violence in the future.

“We must not lose focus on the need to restore a political perspective, on the need to bring Palestinians and Israelis back into an environment that is conductive to negotiations on a final status arrangement and avoids turning the national Israeli-Palestinian conflict into a religious one,” he emphasized. 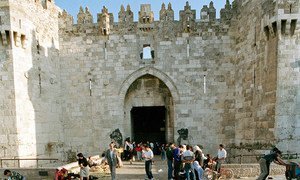 Amid rising violence in Jerusalem, UN and diplomatic partners urge maximum restraint on all sides

Expressing deep concern about the escalating tensions and violent clashes taking place in and around the Old City of Jerusalem, the United Nations and its diplomatic partners in the Middle East peace process have called on all to demonstrate maximum restraint and work towards de-escalating the situation.