A new pilot project in Pakistan to register undocumented Afghan refugees – who up to now have been without identity papers and living in fear of being arrested or deported – would allow up to one million people to have legal status, the United Nations refugee said.

“This significant step will help regularize the stay for many Afghans at a time when return to their home country may not be possible,” Duniya Aslam Khan, spokesperson at the Office of the UN High Commissioner for Refugees (UNHCR), told reporters at the UN's Geneva Office.

The six-month registration programme started yesterday in the capital Islamabad and Peshwar, in the north-west, which hosts the largest number of undocumented Afghans. The programme is expected to be rolled out throughout the country starting on 16 August.

Afghans registered under the new scheme receive African Citizen cards, which allow them to legally stay in Pakistan until the Government of Afghanistan can issue them passports and other documents, and provides protections under Pakistani law.

“The initiative will bring much needed relief for many Afghan families where some were registered refugees, while others had no legal status,” Ms. Khan said.

The registration project comes after three years of consultations between the Governments, and is part of Pakistan's Comprehensive Policy on the Repatriation and Management of Afghans, which was endorsed by its cabinet in February this year.

“I am feeling confident that I will have at least some sort of identity while in Pakistan,” Mohammad Rehman, who was born and raised in Pakistan to Afghan parents, told UNHCR. “If the police arrest me now, at least I will be released without much trouble.” 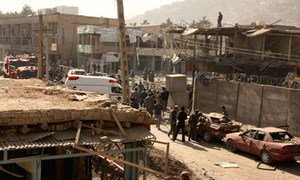 Civilians lives – including those of women and children – continue to be lost at record high levels amid a worsening toll of suicide attacks, the United Nations mission in Afghanistan said today, calling on anti-government forces to stop indiscriminate attacks against civilians as well as on the Government to stop using mortars and rockets in populated areas.