Urgent action is needed now towards the meaningful participation of women in peace processes, as well ensuring their voices are heard in all aspects of society, the United Nations deputy chief told reporters in Abuja today as part of a first-ever UN-African Union trip focused on women, peace and security.

“It is about action. It is about implementation,” Deputy Secretary-General Amina Mohammed told the press in the Nigerian capital, where she also spotlighted the importance advancing gender equality as a precondition for sustainable development for all.

During the joint AU-UN high-level trip, which will move on from Nigeria to the Democratic Republic of Congo (DRC), Ms. Mohammed will be accompanied by UN Women Executive Director Phumzile Mlambo-Ngcuka, the UN Special Representative on Sexual Violence in Conflict, Pramila Patten, and the Special Envoy of the AU on Women, Peace and Security, Bineta Diop.

“It is a new era,” Ms. Mohammed continued, “a new era where we have many tools at our disposal.”

“We know that from the economy to stability and peace, we are not able to achieve our goals if we are only investing in half of the population. “Human resource is a major asset of a nation and a continent. Women often account for half. But they lack the investment we need,” she added, urging that women's voices be heard in all aspects of society.

What we really want to do is to hear and bring the messages of women Amina Mohammed, Deputy Secretary-General

“What we really want to do is to hear and bring the messages of women – women in decision-making, women who bear the brunt and carry the burden of many of the tragedies that we see – to see how we can come out of this, how we can be a constructive partner in finding the solutions to sustainable development,” she stressed.

According to Ms. Mohammed: “It makes economic sense. It's not charity. It is about rights […] it's a huge part of our economic development.”

Over the past two days, the deputy UN chief met with the acting President and key ministers on these and other issues that affect development.

From the activities of Boko Haram in Nigeria's north-east to the conflicts between Fulani herdsmen and farmers, she said conflicts drain the country's economy of resources that could be better used for development.

“Without peace we cannot have development. Whatever investments that we are putting into development we are seeing them eroded by the lack of peace,” she underscored.

Ms. Mohammed also spoke about meeting with young refugee girls, who, living in camps, fled tragedies, including some of the freed Chibok girls. “We heard stories that young girls should not have to tell, and these have been a tragedy for all of us,” she lamented.

However, the deputy UN chief was inspired by their spirit as they “refuse to be victims and are survivors with a future that is bright.”

“We saw girls […] who talked about their dreams – no longer their nightmares,” she said, adding that while challenges remain as there are many girls still left behind, “it shows that there is hope.”

Ms. Mohammed underscored the importance of strengthening partnerships with Nigeria and the African Union for a scaled-up response to support women and girls who face these tragedies.

Turning to the Sustainable Development Goals (SDGs), she emphasized that by investing in them, “we can look at the root causes […] we can prevent the conflict from happening.”

Also, as present conflicts are resolved, the SDGs provide an opportunity “to invest in the day after, to make sure that we are building back so that we don't lose the dividend of peace.” 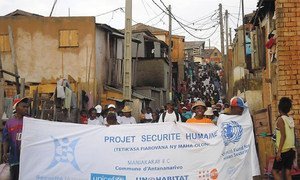 United Nations officials today highlighted the benefits of a human security approach to accelerate progress on the Sustainable Development Goals (SDGs), as well as tackle a range of other issues, during a high-level event held at Headquarters.