The United Nations refugee agency today said that it is “deeply shocked and saddened” at reports of the deaths and injuries of internally displaced persons in an aerial attack on the embattled Mawza district in Yemen's Taizz governorate.

“This latest incident once again demonstrates the extreme dangers facing civilians in Yemen, particularly those attempting to flee violence, as they disproportionately bear the brunt of conflict,” said William Spindler, spokesperson for the Office of the UN High Commissioner for Refugees (UNHCR), in a press release.

The airstrike was reported on Tuesday afternoon and the civilian casualties are still being verified with initial reports pointing to at least 20 deaths, including that of women and children, the spokesperson said.

Most of those killed are believed to be from the same family. The victims were reported to have been displaced to Mawza from nearby Al Mokha district, which is also experiencing intensified hostilities.

There are two million internally displaced people in Yemen who have fled elsewhere across Yemen since the beginning of the conflict, but continue to be exposed to danger as the conflict has affected all of Yemen's mainland governorates.

UNHCR has been appealing to parties to the conflict to ensure their utmost in the protection of civilians and the mitigation of suffering, Mr. Spindler said, stressing that a peaceful political solution is urgently needed. 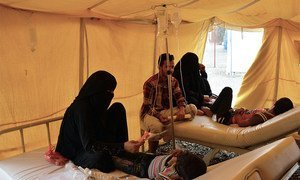 As the war in Yemen grinds on, the increasing battles of attrition are extracting a terrible toll on the country’s women, men and children, senior United Nations officials told the Security Council, calling for concrete action to end the fighting.