Not the time for 'blame game,' urges UN Special Advisor on Cyprus

UN Photo/Jean-Marc Ferré
Espen Barth Eide, Special Adviser to the UN Secretary-General on Cyprus during press conference ahead of the Cyprus talks in Geneva.

Not the time for 'blame game,' urges UN Special Advisor on Cyprus

18 July 2017
Speaking to the media following his briefing to the United Nations Security Council, the Special Adviser to the Secretary-General on Cyprus, Espen Barth Eide, urged all sides to work collectively and to build on the achievements thus far.

“Not the time to engage in a blame game. There is more than enough of that going around,” said Mr. Eide, speaking to the media at a press stakeout.

“We have to admit that there was a collective failure at stitching together a deal in Crans-Montana,” he added, noting the location of the most recent talks.

Recalling UN efforts there, including those by Secretary-General António Guterres, Mr. Eide said that only once all issues on the table are settled, could it be said that a deal concerning the island has been reached.

In his remarks, the Special Adviser also highlighted that the UN would always remain available and at the disposal of the Greek Cypriot and Turkish Cypriot leaders to facilitate the process and noted that the talks are led by the leaders and owned by them.

Referring to the Secretary-General's report concerning Cyprus, Mr. Eide said: “We hope [the leaders] will not jump to conclusions [and that] they reflect seriously on what can be done now, after the Conference on Cyprus failed.”

“Given a number of developments in and around the island, it is crucial that the reflection is done in the spirit of understanding and compromise, rather than by exacerbating the differences,” he stated

Speaking prior to Mr. Eide, Liu Jieyi, the Ambassador and Permanent Representative of China to the UN and the Chair of the Security Council for the month of July, announced that the Council members expressed their intention to renew the mandate of the UN Peacekeeping Force in Cyprus for a further period of six months.

“[The members also] urged the sides to sustain their commitment to a settlement [on the island] and maintain the gains achieved and reflect on the best way to re-start the process,” he said.

In addition to Ambassador Liu and Mr. Eide, the Special Representative of the Secretary-General for Cyprus, Elizabeth Spehar, also spoke at the stakeout, expressing her appreciation to the Security Council for its support. 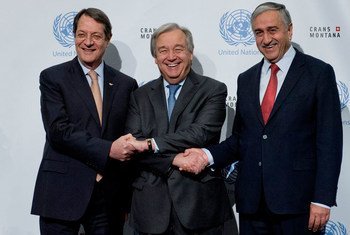 30 June 2017
United Nations Secretary-General António Guterres today called on the leaders of the Greek and Turkish communities in Cyprus to grasp “an historic opportunity” to reach a comprehensive settlement to the conflict that has divided the Mediterranean island for more than four decades.