Japanese entertainer Piko Taro, famous for his “Pen-Pineapple-Apple-Pen” (PPAP) viral music video, has joined the ranks of celebrities who promote the Sustainable Development Goals (SDGs) on behalf of Governments, the United Nations, civil society and other actors in the global development community.

“I knew SD Gundam, but I had no idea what the SDGs stand for,” the comedian said jokingly referring to the Japanese anime television series, while visiting the UN Headquarters on Monday. He noted that he had been surprised when the Japanese Government asked him to assume this promotional role and perform at the UN.

Piko Taro’s PPAP dance music video has gone worldwide, having scored more than 100 million views since its release in August 2016.

At a reception the Japanese Government hosted on the sidelines of the High-Level Political Forum on sustainable development, Piko Taro presented both the original song and the rearranged version, whose lyrics stand for “Public-Private Action for Partnership” on SDGs.

Schoolchildren from the UN International School joined him on stage, singing and dancing along the revised version. The event was also attended by Japanese Foreign Minister Fumio Kishida.

Earlier that day, he swung by “Spotlight on SDGs” exhibition featuring prize-winning photos taken by students around the world. He said he was convinced of the power of visuals to convey the key concepts of the SDGs.

Likewise, he hopes that his rejiggered PPAP song can help people around the world better understand the SDGs, which were adopted by UN Member States in 2015, with 2030 as a target year to eradicate poverty, address climate change and build peaceful, inclusive societies for all.

“The Sustainable Development Goals, if people remember these words, they may get curious. What are the SDGs? They learn - oh, 17 Goals,” he said. 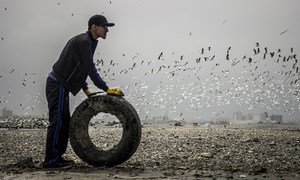