Senior United Nations officials on Thursday underscored the importance of a strong partnership between the Organization and Member States in moving forward with efforts to prevent and address sexual exploitation and abuse.

“Together, we have strengthened our efforts,” Under-Secretary-General for Field Support Atul Khare told a meeting at UN Headquarters with more than 60 Member States, including troop and police contributors.

“We have greater transparency in our reporting and our public information; investigations, whether by the United Nations or Member States, are concluding more quickly. We are expanding our assistance to victims, including through the establishment of a trust fund for which we count on your support,” he noted.

While acknowledging the progress made, Jean-Pierre Lacroix, Under-Secretary-General for Peacekeeping Operations, added that “in spite of our efforts, reports persist, implicating all categories of personnel, throughout peacekeeping and the wider United Nations system.”

As part of the Secretariat's ongoing engagement with Member States, the meeting discussed ongoing proposals relating to enhancing investigations and cooperation between Member States and the UN, promoting greater accountability and strengthening support to victims. The meeting also addressed uniform standards of investigations and operational guidance on UN Security Council resolution 2272 (2016) on sexual exploitation and abuse by peacekeepers.

The Secretary-General, in his most recent report, issued on 28 February 2017, set out his strategy for preventing and addressing sexual exploitation and abuse. It is centered around four elements: putting the rights and dignity of victims first; ending impunity for those guilty of crimes and abuses; drawing on the knowledge and wisdom of external partners such as civil society, local communities and experts; and raising awareness and sharing best practices.

“The Secretary-General has made it clear that he is fully committed to leaving no stone unturned as we work in partnership to end this menace,” Mr. Lacroix told participants. “Accountability is a shared responsibility,” he added, urging Member States to continue their efforts towards removing obstacles to the criminal prosecution of such crimes committed by their nationals, including through legislative reform.

In addition, Mr. Lacroix said that the Secretary-General's strategy recognizes that sexual exploitation and abuse is not a problem limited to blue helmets, but rather a system-wide problem that requires a system-wide approach.

Member States were also briefed on progress in developing the Voluntary Compact, between the UN and Member States, a proposal made by the Secretary-General in his report, to send a signal to the world of joint commitment and mutual accountability in addressing this issue. The compact will be open to all Member States who wish to enter into it, and will be presented at the High-Level Meeting on sexual exploitation and abuse that will be held on 18 September on the margins of the General Assembly.

Expressing his hope that all Member States would enter into the compact, Mr. Khare welcomed their support to this important initiative.

Member States were unanimous in their pledges to uphold the UN's zero tolerance policy and welcomed the concrete measures taken by the Secretariat and highlighted the importance of the UN system-wide approach. Many also highlighted their efforts and best practices in the fields of prevention, investigation and victims' assistance.

Yesterday's meeting comes on the heels of last week's Chiefs of Defense Conference, where some 100 national chiefs of defense together with UN senior officials, including Mr. Lacroix and Mr. Khare, collectively addressed a number of peacekeeping issues, including conduct and discipline.

♦ Receive daily updates directly in your inbox - Subscribe here to a topic.
♦ Download the UN News app for your iOS or Android devices.
exploitation 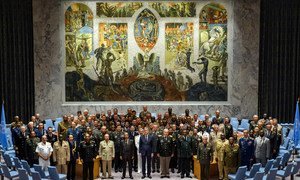