Economic analysis by the United Nations over the past 70 years has proven to be accurate and can help countries navigate through a difficult current world economic situation and implement the new global development goals, an in-depth review of the analysis has found.

First published in January 1948, in the direct aftermath of World War II, the World Economic and Social Survey is the oldest annual economic and social report of its kind and has promoted a broader understanding of development.

“This year’s Survey reviews 70 years of this flagship publication and draws lessons for the pursuit of sustainable development as we look ahead,” noted UN Secretary-General António Guterres in the report’s preface.

Individual countries have pursued widely different development paths during a period that has witnessed the fastest growth in global output and trade than any other period in the history of humanity. The nations have achieved varying results from the bleak to the miracle.

The review, released by the UN Department of Economic and Social Affairs, finds that the free trade, development-friendly, country-specific advice of the Survey over the past 70 years has proven to be accurate and prescient and should continue to aid nations as they peruse implementation of the Sustainable Development Goals (SDGs).

Survey’s prescient analysis ‘a valuable tool’ for the SDGs

“Despite significant changes in global development over the years, many parallels can be drawn between the current challenges facing the international community and those that confronted the world in the past,” Mr. Guterres said, underscoring that the 2030 Agenda for Sustainable Development “is a moral and economic imperative – and an extraordinary opportunity.”

The review argues that in the early 1950s, the Survey was ahead of the curve in development thinking. It was an early proponent of development not just as the expansion of output, but also as a process of large-scale structural and institutional change for the promotion of high standards of living, full employment and social progress. 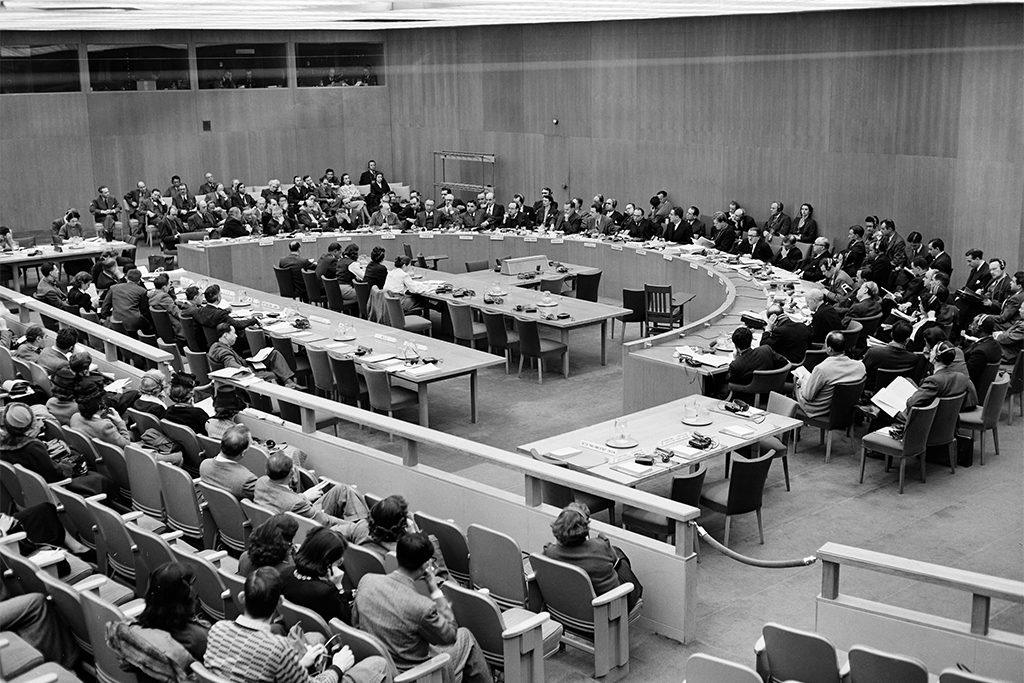 General view of opening meeting of 6th session of the Economic and Social Council of the United Nations on 2 February 1948 at Lake Success, New York. The 18-member organ of the United Nations was established by the Charter "to reaffirm faith in fundamental human rights... to promote social progress and better standards of life in larger freedom... to employ international machinery for the promotion of the economic and social development of all peoples. UN Photo

The Survey advocated the importance of international coordination, by saying that the action of the government of one country may constitute an element disrupting the equilibrium of other countries in the absence of effective coordination.

In other instances, the Survey in the 1960s contributed to the analytical basis for the establishment of the UN Conference on Trade and Development (UNCTAD) and UN Industrial Development Organization (UNIDO), providing a forum for developing countries to advance their insertion into global trade and support for industrialization.

The Survey also proved to be forward-looking in the 1980s. Before the debt crisis in developing countries erupted, it had raised concerns about large fiscal and trade deficits of developing countries and their implications for the long-term growth and social progress. Leading international financial institutions at the time concentrated on getting economies into balance with little consideration of the social consequences.

The Survey offered a critique of the “one-size-fits-all” approach adopted by adjustment programmes during the debt crisis, which significantly constrained national policy space and contributed to a “lost decade of development” in Latin America and Africa.

This critique supported countries in the design of country specific development strategies in the 1990s. The Survey prudently cautioned against factors leading to the financial crisis in the late 2000s.

The Survey contends that the achievement of the Sustainable Development Goals requires greater and deeper international coordination in key policy areas including fiscal, monetary and trade, but such challenges are not insurmountable.

In the last 70 years, the world has witnessed episodes of economies experiencing remarkable economic development, including Germany and Japan in the 1950s and 1960s, followed by the rise of economies in Hong Kong, the Republic of Korea, Singapore and Taiwan. In recent decades, some Southeast Asian countries, Botswana, China and India, among others, have also experienced high and sustained economic growth and improved standards of living.

Representing over $7 trillion, eleven major financial institutions around the globe have joined forces with the United Nations to promote climate transparency in financial markets, the Organization’s environment wing said today.