Thousands of South Sudanese civilians are fleeing to neighbouring Ethiopia as Government troops advance on a rebel stronghold in the Upper Nile region, a senior United Nations official today said, expressing grave concern about what is already the world’s fastest growing refugee crisis.

Reports from the UN International Organization on Migration (IOM) “suggest that Government forces are now approaching the town of Maiwut, 25 kilometres north-west of Pagak. I’m gravely concerned by this ongoing situation,” the Special Representative of the Secretary-General in South Sudan, David Shearer, told reporters from Juba, the capital.

He added that while it is unclear which side began the fighting, the military advance by the South Sudan forces “is not in the spirit of the unilateral ceasefire” declared by the Government in May.

Mr. Shearer said there has been “active military engagement” over the past week north of Pagak, and at least 25 aid workers have relocated in the area as a result of the insecurity.

The senior UN official, who is also the head of the UN Mission in the country, or UNMISS, also voiced great concern about an orphanage near Torit, south of Juba, surrounded by Government and rebel fighters who are preparing to fight.

“It’s unacceptable that 250 innocent children, and the people who care for them, find themselves in no-man’s land between the warring parties,” Mr. Shearer stressed.

Requests by UNMISS to access the Hope for South Sudan Orphanage have been denied “locally, on the ground.”

The Government forces central command in Juba yesterday gave UNMISS “the go-ahead to send peacekeepers to the orphanage. I’m hopeful that will happen today,” he added.

Mr. Shearer urged both sides to reflect on President Salva Kiir’s Independence Day message of peace and withdraw from the facility.

In addition to accessing the orphanage, a group of Nepalese peacekeepers have been sent to protect civilians and the UN base in Torit.

“The number of patrols we can undertake in the town will increase with the additional peacekeepers. In turn, that should provide more security and boost confidence,” said Mr. Shearer.

He noted that his deputy, Moustapha Soumaré, is travelling to Torit tomorrow and will report back. 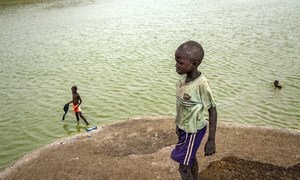 As South Sudan enters its sixth year of independence, the United Nations Children's Fund (UNICEF) is calling the situation in the country “a catastrophe for children” and cautioned that they are being denied a childhood in nearly all aspects of their lives.