UNICEF/ Wieland
A child stays in the Mussungue reception centre for refugees in Dundo, northern Angola. Since April 2017, thousands of people from the Democratic Republic of the Congo crossed the border and arrived in Angola’s Lunda Norte province, fleeing violent attacks in the Kasai region.
11 July 2017

The security situation in the Democratic Republic of the Congo (DRC) continues to be a major source of concern, with violence in the Kasai provinces, in the western part of the vast country, reaching “disturbing” levels, the United Nations Security Council was told today.

Presenting the latest report of the Secretary-General on the situation in the DRC, Under-Secretary-General for Peacekeeping Operations Jean-Pierre Lacroix, who recently visited the country, urged the Council to support the Government and the people to preserve the gains of the past 17 years.

“The current political impasse, the rising insecurity, and the worsening human rights and humanitarian situation in the DRC require a concerted response from regional and international partners,” Mr. Lacroix said.

“This response must aim to help to create the conditions for a successful transition and the holding of free, fair and inclusive elections, in accordance with the Constitution,” he stressed, with a nod to a political agreement signed last year which specified that elections would be held by the end of this year.

The agreement – facilitated by Conférence Episcopale Nationale du Congo (CENCO) mediators, and reached in DRC’s capital, Kinshasa, on 31 December 2016 – allowed President Joseph Kabila to stay in power beyond the end of his term.

“At a time when the DRC is at the mid-point of its transition, it is more necessary than ever for national political actors and international partners, including the members of the Council, to remobilize the political agreement of 31 December 2016,” the senior UN official stressed.

Supporting the implementation of the Agreement – in addition to paving the way for elections and protecting civilians – remains a key priority of the UN peacekeeping mission in the country, known as MONUSCO, Mr. Lacroix said.

He underscored his commitment “to ensuring that MONUSCO delivers on its core mandated objectives as efficiently and effectively as possible” while responding to the changing situation on the ground.

MONUSCO is currently undergoing a strategic review, which will likely result shifts in its structure and mandate, based on options presented to the Security Council by 30 September. 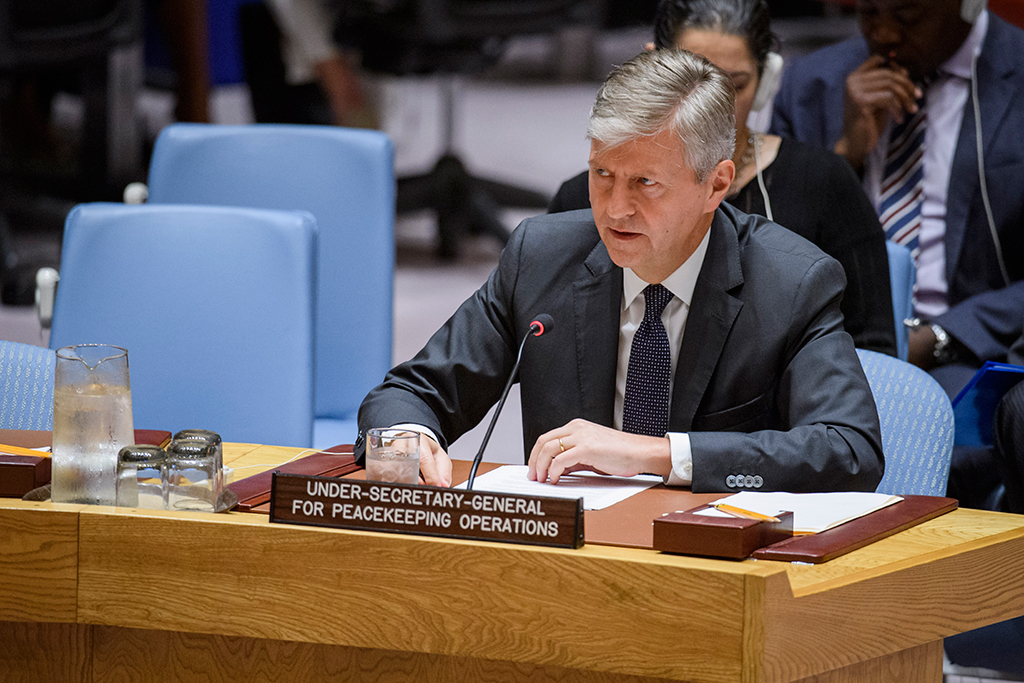 Amid the political impasse, the focus in the country faces rising insecurity, with particular concern over violence in the Kasai provinces, and a recent increase in inter-ethnic violence there. “Disturbing reports of human rights violations and abuses continue to be received on a daily basis,” Mr. Lacroix said.

Dozens of mass graves have been reported so far, and the national investigation efforts are “slow,” he said, adding that “MONUSCO has also received disturbing reports of summary executions and rapes including of civilians by the security forces.”

Between May and June, the number of displaced persons in the DRC increased by 26 per cent to 1.3 million, according to UN figures.

Noting that he visited the country last month, Mr. Lacroix said he had stressed the need to prioritize political means to address the situation in the Kasais and emphasized the urgency of ensuring accountability.

He also stressed UN’s continued focus on ensuring that those responsible for the killing of UN human rights colleagues, Michael Sharp and Zaida Catalan, are brought to justice.

Despite the insecurity, MONUSCO has been able to support pockets of stability, such as in the town of Tshimbulu, where some schools and churches have reopened.

“Through a combination of human rights monitoring and political outreach, supported by a light but increasing military presence, the Mission is helping to bring back some measure of stability wherever it can,” Mr. Lacroix said.

As part of his five-day visit to the Democratic Republic of the Congo (DRC), the top United Nations peacekeeping official visited the vast country's troubled Kasai region and expressed "deep concern" about the ongoing violence there.