Source: UN in collaboration with Project Everyone
10 July 2017

Opening this year's political forum, Frederick Musiiwa Makamure Shava, the President of Economic and Social Council (ECOSOC), said a successful session would “send a strong message of our collective commitment to leave no one behind as we pursue the timely implementation of the 2030 Agenda.”

This year's meeting, the second since the adoption of the new development Agenda in 2015, is on the theme of 'Eradicating poverty and promoting prosperity in a changing world.'

Mr. Shava noted that this year's discussions will focus on eliminating poverty and hunger, ensuring healthy lives, achieving gender equality, building resilient infrastructure, implementing partnerships, and build on progress achieved at The Ocean Conference to conserve and sustainably use the oceans.

The High-Level Political Forum will be held from 10 to 19 July at UN Headquarters in New York and will also include a three-day Ministerial Segment, at which more than 70 ministers are expected, and which will be held with the High-Level Segment of ECOSOC's annual session.

In addition, the session will include discussions on the challenges and gaps in reaching the development agenda in 44 countries that volunteered to give progress reports, and more than 120 side events related to the SDGs.

“The forum is the place to be when it comes to the global review of the SDGs,” said Under-Secretary-General for Economic and Social Affairs, Wu Hongbo, briefing journalists about the upcoming two weeks.

He underscored the importance of all countries and a wide variety of stakeholders taking ownership of the 2030 Agenda and working across borders to make them work for everyone, including the most vulnerable, such as people with disabilities.

“Have we been successful so far? Yes,” said Mr. Wu, pointing to the Secretary-General's progress report on the 2030 Agenda which is being launched during the Forum. “Are we satisfied? No. That is the beauty of having the high-level political Forum. It is a global, central platform on which the countries can tell you where they stand, so this is very important.”

“The important point is that we should keep everyone on point. It's [the 2030 Agenda] is not for one country or one region; it's for all of us. If you have a different point of view, that's natural. But let's keep everyone on board which is so important for mankind.”

In his opening speech earlier in the day, Mr. Wu said he was “struck” by how far countries have come towards reaching the development goals, and how far they still have to go. For example, over 767 million people worldwide lives on less than $1.90 per day in 2013, despite nearly one billion people escaping poverty since 1999.

The maternal mortality ratio must more than double the current progress by 2030; women's political participation must climb some 75 per cent to reach equality with me, and more efforts must be put into preventing and treating non-communicable diseases so people do not die prematurely.

“I am also struck, once again, by the deeply interconnected nature of the different elements of the 2030 Agenda: both challenges and solutions connect different goals and targets,” Mr. Wu said. “This makes it imperative that we work together across silos, sectors, disciplines and individual roles or competencies.”

To key to realizing sustainable development “by all people and for all people” is revitalizing and enhancing global partnerships, the senior UN official said, calling for all relevant people to come together and work together, and to mobilize the necessary resources to put their ideas into practice. 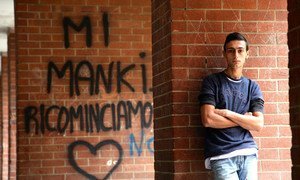