The United Nations today voiced grave concern about the arbitrary detention and arrests of human rights defenders in Turkey and called on the Government to ensure that activists can carry out their work in a safe and enabling environment without fear.

“Human rights defenders must not be silenced,” Liz Throssell, spokesperson for the Office of the UN High Commissioner for Human Rights (OHCHR), told a press briefing in Geneva.

Their detention period has now been extended to seven days and they are reportedly being interrogated over allegations of "membership of an armed terrorist organisation," noted Ms. Throssell.

“We fear they are now at significant risk of torture and other cruel, inhuman or degrading treatment,” she added.

The detainees include Idil Eser Ilknur, the Director of Amnesty International Turkey; Ilknur Üstün of the Women's Coalition; Veli Acu and Günal Kursun of the Human Rights Agenda Association; Nalan Erkem, Seyhmuz Özbekli and Özlem Dalkiran of Helsinki Citizens Assembly; and Nejat Tastan of the Equal Rights Watch Association. One Swedish and one German national, who facilitated the training, were also detained along with the owner of the hotel where the workshop was taking place.

This new wave of detentions is “deeply worrying,” according to OHCHR, as it comes a month after the Chairperson of Amnesty International Turkey, Taner Kiliç, was arrested, along with 22 other lawyers. Mr. Kiliç and six others remain in custody.

The Office is also extremely concerned about two other human rights defenders – Nuriye Gülmen, a university lecturer, and Semih Özakça, a school teacher – who went on hunger strike in March in protest against their arbitrary dismissal in the context of last year’s sweeping purges.

“We call upon the Turkish Government to release and reinstate them in their jobs without delay, and to ensure adequate compensation for their unlawful arrest and dismissal,” said Ms. Throssell.

OHCHR said that in the context of the state of emergency, the Government seems to have criminalized the legitimate exercise of the rights to freedom of peaceful assembly and association, and freedom of opinion and expression, using emergency decrees that fail to meet international human rights standards. 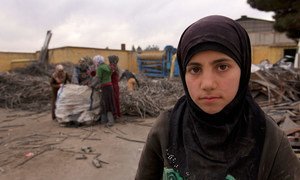 The United Nations Children’s Fund (UNICEF) warned today that one year after the Balkan border closures and the European Union-Turkey Statement, which were aimed at stopping mass migration flows, refugee and migrant children face greater risks of deportation, detention, exploitation and deprivation.