United Nations Secretary-General António Guterres today announced the appointment of Catherine Marchi-Uhel of France as the head of the independent panel to assist in the investigation and prosecution of those responsible for most serious violations of international law in Syria.

The panel, formally known as the International, Impartial and Independent Mechanism to Assist in the Investigation and Prosecution of Those Responsible for the Most Serious Crimes under International Law Committed in Syrian Arab Republic since March 2011, was established by the UN General Assembly in December last year.

Ms. Marchi-Uhel is the first Head of the Mechanism.

Since 2015, she had been serving as the Ombudsperson for the Security Council Committee pursuant to resolutions 1267 (1999), 1989 (2011) and 2253 (2015) concerning Islamic State in Iraq and the Levant (ISIL/Da'esh), Al-Qaida, and associated individuals, groups, undertakings and entities.

According to a statement issued today, she also has extensive experience in the judiciary and in public service, including in the fields of criminal law, transitional justice and human rights.

She was previously a judge in France and an international judge at the UN Interim Administration Mission in Kosovo, and at the Extraordinary Chambers in the Courts of Cambodia.

Ms. Marchi-Uhel also served as the Senior Legal Officer and Head of Chambers at the International Tribunal for the former Yugoslavia and worked in legal positions at the French Ministry of Foreign Affairs and with UN peacekeeping missions.

Also today, Mr. Guterres following consultations with UN Member States and the Executive Board of the UN Entity for Gender Equality and Empowerment of Women (UN Women), announced the appointment of Phumzile Mlambo-Ngcuka of South Africa as Executive Director of UN Women for a further term of four years.

She was initially appointed to the position in July 2013 and assumed office a month later.

Before joining UN Women, she worked with women and girls in different capacities in civil society and as a public representative, focusing on political and economic rights as well as girls' education.

Ms. Mlambo-Ngcuka was the also first woman to hold the position of Deputy President of South Africa (2005-2008). She also held a number of senior positions at the South African Government as well as in the country's parliament. 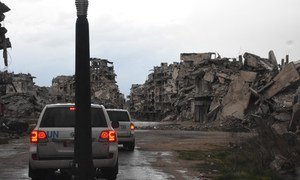 Citing attacks against aid workers in Syria, the removal of live-saving supplies from convoys and bureaucratic impediments restricting access, the United Nations Emergency Relief Coordinator has called for ensuring immediate and safe humanitarian access to save lives that are dependent on assistance.