A recent outbreak of the Ebola virus in the Democratic Republic of the Congo (DRC) is over, the United Nations health agency today said, while adding that enhanced surveillance for the virus continues.

The announcement comes 42 days since the last confirmed Ebola patient in the affected Bas-Uélé province tested negative for the disease for the second time.

“With the end of this epidemic, DRC has once again proved to the world that we can controlthe very deadly Ebola virus if we respond early in a coordinated and efficient way,” said Dr. Tedros Adhanom Ghebreyesus, the new Director-General of the UN World Health Organization (WHO).

At least four people died, and more that 580 were registered and closely monitored after having come into contact with the virus, the UN agency reported.

The virus emerged in Likati, which according to WHO is “a remote, hard-to reach area” bordering the Central African Republic and other provinces of the DRC.

UN officials said the response was “effective” and praised “the timely alert by local authorities of suspect cases, immediate testing of blood samples due to strengthened national laboratory capacity, the early announcement of the outbreak by the government, rapid response activities by local and national health authorities with the robust support of international partners, and speedy access to flexible funding.”

National officials continue to screen for the virus and provide medical care to people who may have come into contact for Ebola.

This was the eighth outbreak of Ebola in the DRC, where the virus was discovered in 1976.

Likati is one of the areas where the UN Children's Fund (UNICEF) had been providing technical support to local officials in May, to help them deliver lifesaving information about Ebola to local populations.

In coordination with WHO, UNICEF also trained people on how to use chlorine and disinfect homes to avoid spreading the virus, as well as how to wash hands properly and reduce contamination by adapting local burial practices.

♦ Receive daily updates directly in your inbox - Subscribe here to a topic.
♦ Download the UN News app for your iOS or Android devices.
Democratic 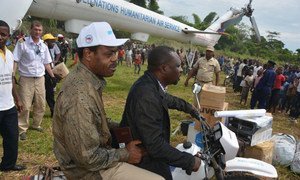 To contain the latest outbreak of the Ebola virus in the Democratic Republic of Congo (DRC), the United Nations Children’s Fund (UNICEF) provided technical support to 145 volunteers of the Congolese Red Cross and community health workers to deliver lifesaving information to local populations in remote areas along the Central African Republic border.