UNHCR/L.Boldrini
A boat carrying asylum seekers and migrants in the Mediterranean Sea.
3 July 2017

Movements by sea from Libya to Europe, despite being the most dangerous route for reaching the continent, have increased and there are indications that it will likely continue to do so, a new study by the United Nations refugee agency has revealed.

According to Mixed Migration Trends in Libya: Changing Dynamics and Protection Challenges, a study commissioned by the Office of the UN High Commissioner for Refugees (UNHCR), around half of those travelling to the country did so believing they could find jobs there, but ended up fleeing onwards to Europe to escape life-threatening insecurity, instability, difficult economic conditions and widespread exploitation and abuse.

“Foreign nationals going to Libya are part of mixed migration flows, meaning that people with different backgrounds and motivations travel together along the same routes, often with the help of ruthless people smugglers and criminal gangs,” said the UN agency in a news release today, announcing the findings.

“They include refugees, asylum seekers, economic migrants, unaccompanied minors, environmental migrants, victims of trafficking and stranded migrants, among others.”

The study also found that almost 80 per cent of the refugees and migrants in Libya were young men (80 per cent), aged 22 on average and travelling alone (72 per cent).

Of particular concern was the rise in number of unaccompanied and separated children travelling alone, now representing some 14 per cent of all arrivals in Europe via the Central Mediterranean route, as well as women, particularly those from West and Central Africa, who could be victims of trafficking.

It also revealed that while economic reasons was the major factor motivating people to travel, many were also trying to flee violence, conflict or political persecution in their countries of origin.

In addition from people from within the African continent, the refugees and migrants in Libya also included individuals from as far as Syria, Iraq and Bangladesh.

However, many arriving in the country risk being kidnapped, held captive and abused by human smugglers or criminal gangs.

RELATED: 'No limit' to cruelty of traffickers, says UN agency, as video surfaces of abused migrants in Libya

In the news release, UNHCR noted that conflict, instability and the collapse of the justice system and reigning impunity in Libya have contributed to an environment where human smuggling and criminal networks flourish.

In order to provide humanitarian assistance to those arriving as well as to the Libyans affected by the ongoing conflict, UNHCR is scaling up its response and recently issued an appeal for $75.5 million to strengthen protection monitoring and interventions, as well as advocacy on issues related to respect for human rights, access to basic services, asylum procedures and freedom of movement.

The UN agency is also stepping up efforts in Libya and the neighbouring countries to provide credible alternatives, find durable solutions and establish legal pathways for refugees and asylum seekers, as an alternative to dangerous trips to the country or over the Central Mediterranean Sea to Europe.

The study was commissioned by UNHCR and done by Altai Consulting, a specialised consulting firm that focuses on research, monitoring and evaluation in fragile states, and IMPACT Initiatives, a Geneva-based think-tank that assesses, monitors and evaluates aid programmes.

Its findings are primarily based on qualitative data – including interviews with refugees and migrants – collected in Libya, Algeria, Chad, Italy, Niger and Tunisia, between October and December 2016. 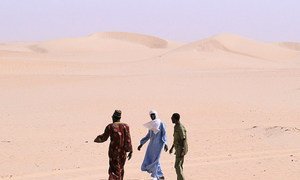 The United Nations migration agency in Niger has saved more than 600 lives since April 2017 through a new search and rescue operation that targets migrants stranded in Sahara Desert, but 52 did not survive.