After ‘successful’ visit to Haiti, Security Council notes window of opportunity for reforms

UN Photo/Logan Abassi
Ambassador Sacha Sergio Llorentty Solíz (centre left) of Bolivia and President of the Security Council for June, with PresidentJovenel Moise (centre right) of Haiti, during a three-day visit of a Security Council delegation to Haiti.
30 June 2017

Haiti has a window of opportunity to implement reforms necessary to bring the Caribbean country onto a path of stability and development, the United Nations Security Council President said today.

Recounting the Council’s recent visit to Haiti, Ambassador Sacha Sergio Llorentty Soliz of Bolivia, which holds the presidency for the month of June, pointed to opportunities to cement positive change in the country.

“Haiti is at political crossroads. The window of opportunity is open to promote the reforms the country needs to respond to challenges,” he said. These include strengthening the rule of law, reforming the security sector, providing basic services, and creating jobs.

Mr. Llorentty led the Security Council mission to Haiti from 22 to 24 June, to get a first-hand look at how the UN could best contribute to stability and development in the country.

“The mission of the Security Council to Haiti was successful because of the large amount of information we obtained in face-to-face meetings, and the better understanding of concerns and expectations that Haitians have about the drawdown of MINUSTAH and the transition to the new mission,” Mr. Llorentty said, using the acronym for the UN Stabilization Mission in Haiti.

In April, the Council extended MINUSTAH’s mandate for a final six months, deciding to transition it into a smaller follow-up mission, known as the UN Mission for Justice Support in Haiti (MINUJUSTH), which would assist the Haitian Government to strengthen rule-of-law institutions, its security sector and human rights monitoring.

“The information gathered will be useful when defining the nature of implementation of the new mission,” said Mr. Llorentty.

The main issue which came up at every meeting, and which requires the Council’s attention, Mr. Llorentty said, was cholera. Concerns over cholera were vital to all aspects of Haiti’s future, from water and sanitation concerns to its development and stability, he noted.

In December 2016, then-Secretary-General Ban Ki-moon put forth a New Approach to Cholera in Haiti, which demonstrated the Organization’s commitment to eliminating the disease in the country. 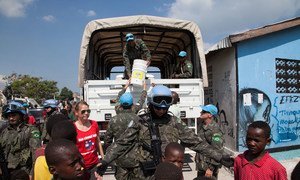 In Haiti, Security Council spotlights opportunities for country's reform towards stability and development

Wrapping up a three-day visit to Haiti, a Security Council delegation today stressed that it has accomplished the objectives of the mission, including a first-hand look into how best the United Nations could contribute to the country's lasting stability and development.