UN Mission in Colombia
President Juan Manuel Santos; Special Representative of the Secretary-General Jean Arnault; and head of the FARC-EP Secretariat Timoleon Jimenez at a ceremony for the final laying down of weapons in Colombia.
30 June 2017

Highlighting progress in the Colombian peace process, especially the completion of the laying down of arms by the Revolutionary Armed Forces of Colombia (FARC-EP), the United Nations envoy for the country has called for shifting the momentum to other aspects of the historic peace deal.

In his briefing to the UN Security Council today, Jean Arnault, the Special Representative of the Secretary-General for Colombia, recalled the conviction expressed by President Juan Manuel Santos and Timoleon Jimenez, the head of the FARC-EP Secretariat, at a ceremony for the final laying down of weapons – that the half-century-long armed conflict was over.

“I cannot but quote President Santos when he said that ‘reaching that day, living that day had made it worthwhile to be President of Colombia’,” said Mr. Arnault.

Attention should now shift to other aspects of the peace agreement, including the reintegration of FARC-EP combatants and militias, “among whom a deep sense of uncertainty prevails as to their physical security following disarmament and their socio-economic future,” he noted.

“No effort can be spared in the prompt implementation of that agenda,” he added.

He also highlighted that in addition to the reintegration of combatants, the peace process must also respond to the needs and expectations of the more vulnerable sectors of Colombian society and recalled the priority areas identified by the Colombian Government: rule of law and increased security; providing access to goods and services to areas that did not have access to it; and prompt delivery of justice to victims of the conflict.

“We welcome the fact that together with reintegration these were precisely the priorities indicated by the Government to the [UN] Peacebuilding Fund, and we call upon the international community to support the achievement of these goals,” said Mr. Arnault.

In this context, Mr. Arnault, who is also the head of the UN Mission in Colombia, expressed that it was an honour to be requested by the Government and the FARC-EP to establish a second verification mission focused on reintegration and wider security guarantees, and to begin as soon as possible.

“Like the first mission, the second one will be as much about fostering cooperation and building confidence as it will be about verification as such,” he said, noting that the Mission believes that the trust that has been established between it, the two parties, state institutions and civil society can be brought to bear on the success of the second mandate.

The UN envoy also informed the Council of the impact of the Tripartite Monitoring and Verification Mechanism as an effective tool to maintain and strengthen confidence between the parties.

“Its presence at the local level will help ensure that incidents that may occur in the coming weeks and months can continue to be dealt with cooperatively.”

As to the steps after the laying down of arms, Mr. Arnault also informed the Council that the UN Mission and the FARC-EP, with the support of the armed forces and the police, will now focus on the disposal of hundreds of arms caches, the collection of weapons in them, and the destruction of explosives and unstable armament.

“The disposal of arms caches is undoubtedly a difficult process, but we are encouraged by the willingness of FARC-EP and the armed forces to move forward, and we are confident that if not all, at least a high percentage of the caches can be dealt with [within set timeframes],” he stated. 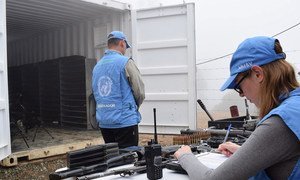 The peace effort in Colombia today reached a milestone, with nearly all of the remaining number of weapons held by the Revolutionary Armed Forces of Colombia (FARC-EP) turned over to the United Nations for registering and storing.