UNICEF/Romenzi
Many have fled the violence and the ongoing destruction of Mosul as did this women and child carrying their belongings as they flee fighting between Iraqi security forces and ISIS in the Al-Mamoon neighbourhood, west Mosul (March 2017).
30 June 2017

The United Nations human rights office has expressed concern over forced evictions of people alleged to have ties with the Islamic State in Iraq and the Levant (ISIL/Da'esh) terrorist group, noting that such actions may amount to collective punishment that is in clear contravention of the Iraqi Constitution as well as human rights and humanitarian law.

“As Mosul is increasingly liberated from ISIL, we are seeing an alarming rise in threats, specifically of forced evictions, against those suspected of being ISIL members or whose relatives are alleged to be involved with ISIL – threats that have also been made in other areas,” said Rupert Colville, spokesperson for the Office of the High Commissioner for Human Rights (OHCHR), at today’s press briefing in Geneva.

Fighting in Mosul is becoming ever more intense and concentrated as Iraqi national security forces, supported by the international coalition, push to retake the whole of the city from ISIL.

“We are extremely concerned at the situation of civilians in Mosul,” Mr. Colville said, reminding all parties to the conflict of their obligation to distinguish between civilians and combatants in armed conflict.

He said that OHCHR received reports of “night letters” left at families’ houses or distributed in neighbourhoods, including in Sharqat in Salahadin Governorate, Al Heet City in Al Anbar and Al-Qayyarah in Ninewa, as well as in Mosul City.

These letters typically warn people to leave by a particular date or face forced expulsion. Many of these threats are the result of tribal agreements that explicitly demand that families of ISIL-affiliated members be excluded from the area.

“People are at real risk of forced eviction from their homes and losing access to basic necessities, including adequate housing, food, access to health services and education,” Mr. Colville said, urging the Iraqi Government to take action to halt such imminent evictions or any type of collective punishment.

“Illegal forced evictions are acts of vengeance that are detrimental to national reconciliation and social cohesion,” he added.

On Thursday, Peter Hawkins, the representative of the UN Children’s Fund (UNICEF) in Iraq, called for the protection of children trapped in the Old City neighbourhood of western Mosul.

“Children are facing multiple threats to their lives. Those stranded in the fighting are hiding in their basements, fearful of the next onslaught. Those who try to flee, risk being shot or wounded,” he said in a statement.

“The plight of these children and their survival must remain a top priority now and in the weeks and months to come,” he added.

♦ Receive daily updates directly in your inbox - Subscribe here to a topic.
♦ Download the UN News app for your iOS or Android devices.
Mosul 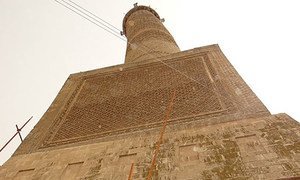